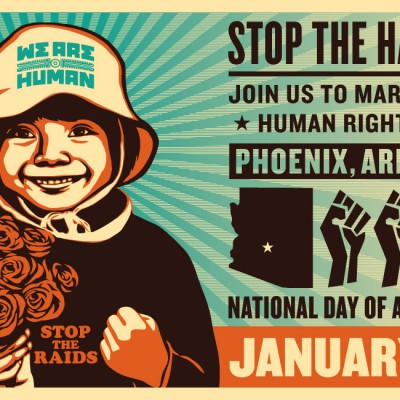 At this time we are making an urgent national call for all peoples concerned and engaged in changing the course of hate in this country to join us January 16th, 2010 in Phoenix Arizona. The time has come to once again take the streets and stand up against hate! Twice in the past year we have stood up with resounding response and results. After our two previous five thousand plus people actions: First, investigations from the US Justice Department and FBI were started. Second, congressional hearings were hosted and the entire nation now knows of Joe Arpaio and his constant abuse of human rights. We have all succeeded in bringing to the forefront the atrocities that the 287g and ICE Access programs bring to our communities, now we must unite to stop their abuse.

It is time, just like Martin Luther King and the Civil Rights Movement took the streets of Montgomery Alabama that at that time was the epicenter of hate; we must do the same in Phoenix. This date is significant because it marks one year of the Obama administration that has resulted in the continuation and expansion of the anti-immigrant Bush policies. It is also the weekend we celebrate Martin Luther King and the civil rights movement struggles of the 60’s. Once again we are at a crossroads when people from our communities are being used and treated unequally.

Unfortunately fear and injustice remain prevalent in Maricopa County, not much has changed as Joe Arpaio and his Sheriff Deputies continue to terrorize the streets of Maricopa County and continues his physical abuse in the jails with the 287(g) agreement. Racial profiling by city, county and state law enforcement is rampant. The state of Arizona continues to racially profile under the guise of implementing anti-migratory worker and smuggling laws.
Knowing justice is on our side we must unite and face terror with valiant actions toward eliminating inequalities and hate from our midst.

From MLK’s own words-

“He who passively accepts evil is as much involved in it as he who helps to perpetrate it. He, who accepts evil without protesting against it, is really cooperating with it.” Martin Luther King, Jr.”

Arpaio is Not our America

Join Us! Message from Students in Phoenix. 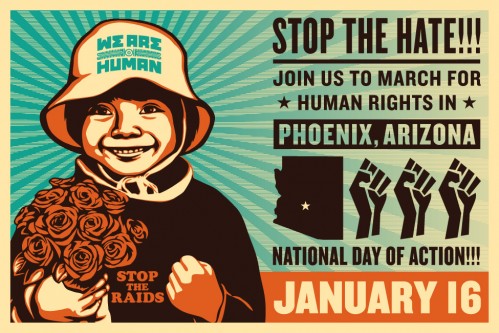