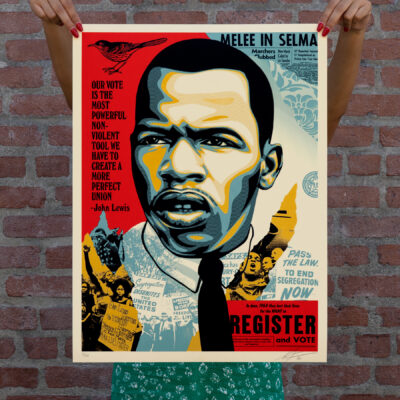 John Lewis is a hero of mine because of his civil rights activism and dedication to justice throughout his life’s work, both in the streets and in politics. Rep. Lewis worked as a grassroots organizer and was beaten by police while marching for racial equality, but also campaigned, was elected to congress, and served as a lawmaker for 40 years. John Lewis is a role model for using what I call “the inside/outside strategy,” which entailed working in whatever zone necessary, outside the system or inside, and using his powers as an organizer and communicator to make the nation better.
There is no better example of dedication to justice and civic engagement than Rep. John Lewis. With the election approaching and the rise of voter suppression strategies utilized by the Republicans, I felt an image of John Lewis reminding people that the hard-fought progress on voting rights and equality must be maintained vigilantly when threatened, would be an important message to send before Nov. 3. I also wanted to symbolically thank John Lewis for all his service to humanity.
When John Lewis made his cancer diagnosis public, my friend & photographer, Steve Schapiro, suggested that we collaborate to honor him. I was thrilled by that idea and wrote a letter to John Lewis proposing the image of him. He gave the project his blessing but sadly passed away shortly before the art was completed. I know he was a humble person, but I hope he’d be proud that his actions have given inspiration and fuel to me and millions of others. Thanks for the fire, John Lewis!
A portion of proceeds from this print will go to Fair Fight. Thanks for caring, and don’t forget to vote!