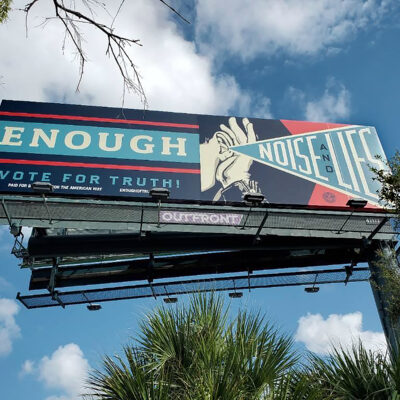 ENOUGH of Trump was a multi-platform movement created earlier this year by People For the American Way to flood swing states with public art projects in advance of the 2020 Presidential election. It’s been an honor to be one of several artists to work on this campaign. Frustrated by failure after failure during Trump’s presidency, a dozen artists including myself created art to remind voters this year that we’ve had ENOUGH of Trump!

While much work remains, from ensuring a smooth transition of power, to battling in Georgia for the control of the Senate, we can now claim a win against a president and an administration that has terrorized America for the past 4 years! I’m thrilled to know that our art was able to reach voters in the most important Electoral College states. Thank you, People for the American Way for letting me be a part of this powerful project!