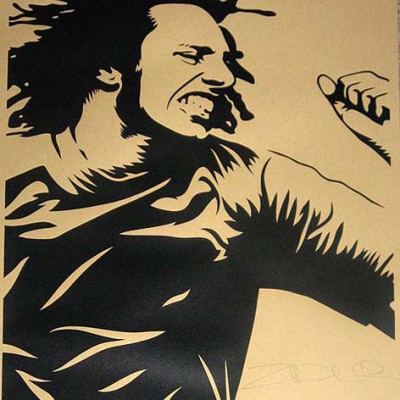 We wanted to do our part in getting the word out about extreme injustices going on in some of our neighboring states and help out a couple of friends.  Check out the information below and do your part – buy a print!

“To witness what is happening in Arizona and remain neutral is to be implicated in human rights violations that are occurring right here on US soil against migrants. History will not be kind to Joe Arpaio.   He will be remembered with other infamous sheriffs like Bull Connor who subjugated and terrorized communities for shortsighted political gain.  I hope everyone will join me in protesting Sheriff Joe.”
– Zach De La Rocha

Here are some links to further your understanding the situation:

http://www.nytimes.com/2009/02/06/opinion/06fri2.html?_r=2
PRINT WILL GO ON SALE ON MONDAY, 3/16,  AT HECHOCONGANAS.com
I made this illustration in mid 2006 and made a stencil piece on collaged canvas.  I originally created this image to pay homage to longtime idol Zach De La Rocha.  When I was growing up in the late 90’s and early 2000’s Zach was one of the only artists in the mainstream that was addressing issues or paying respect to leaders or movements that I cared about.  Working with Zach has been one of my goals for a couple years and through this project I have met that goal.  About 2 weeks ago my good friend Juan emailed me an article and video clip of Zach at a protest in Maricopa County, Arizona protesting the injustices of Sheriff Joe Arpaio.  Arpaio has been responsible for Tent City and recently ignoring the screening process in order to deputize officials which then has allowed him to hire sheriffs from minutemen or even klan backgrounds.  His department has gone into people’s homes, jobs, cars without warrants and have made many arrests on the premise of race or cultural background.  His department has gone as far as arresting and deporting a mother in a routine traffic stop in front of her children and abandoned the children after the arrest. Immediately after I saw the video and read the article I sent Zach an email proposing to him that I was intereted in making a print to raise awareness on the issues  in Maricopa, but to also raise money to donate to groups that are putting pressure on the government to put Arpaio under investigation.  Immediately Zach agreed to sign these prints with me, so I printed these up in my garage on Thursday and they where singed on Sunday.  This past Tuesday at around 12:30am I received a call from Zach and he was excited to let me know that Joe Arpaio was finally put under investigation.  Even though Arpaio has been put under investigation the battle is not over and the organizations that have been proactive in order to get the investigation going still need our moral and financial support.  Proceeds earned from this print will be donated to help put a stop this injustice.  Thanks for the support.
– Ernesto Yerena 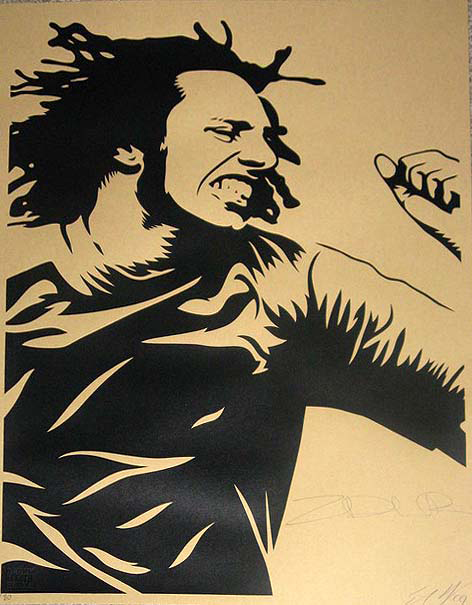 A special thanks to Zach for supporting this project, Tod Mazer and James Ersted who shot and cut the video, Matt “Cookiehead” Roberts for selling and shipping, Juan Garica and Savanah Loftus for photos, and Shepard/Dan Flores/Obey Giant for helping us get the word out on what is going on in Maricopa, and everyone that purchases a print thank you very much.  VIVA LAS GANAS!!!!