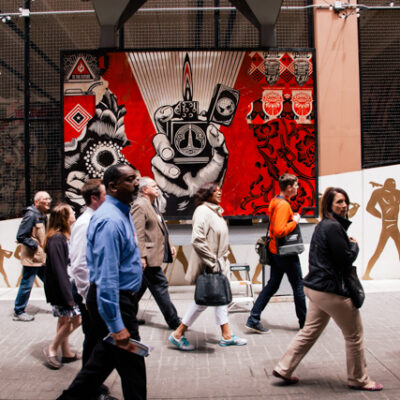 Back in Spring 2015, I went to Detroit to some ambitious projects with the Library Street Collective. I’ve always loved Detroit because it has so many beautiful textures, old signs, great architecture, and derelict spaces for the renegade artist to fill. Now, it also has some creatively and progressively minded community members who see street art and graffiti as part of Detroit’s rejuvenation through incubating creative culture. Bedrock was cool enough to offer me a 185 x 55 ft space on their building to do my largest mural to date. It’s gone now, but I’ll be back! I also painted a smaller mural called “Pattern of Destruction” in the alley called The Belt, and created 5 smaller (8’x8′ and 8’x12′) panel pieces along The Belt as part of Library Street Collective‘s “Public Matter” project. A bunch of other great artists like Tristan Eaton, POSE, Hush, Vhils, Sam Friedman, and others have contributed to this project. We also did a 14 ft water tower and some other spots. We had an amazing opening with a great turnout and very enthusiastic response to all the art in the gallery and on the streets. Thanks Detroit! The show was a huge amount of work, and I owe a lot of thanks to my crew of assistants, Nic Bowers, Dan Flores, and Rob Zagula for their help executing the murals and putting in the long hours. Thanks to Jonathan Furlong for the great photos! -Shepard