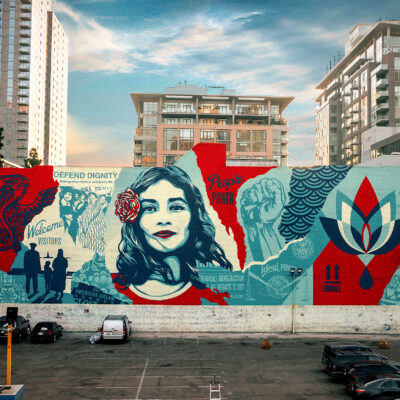 Today, I’m throwing it back to one of my largest murals in LA, which I completed last November, in partnership with Branded Arts, Over the Influence, and my mural crew. This “Defend Dignity” piece was created to inspire sensitivity toward our fellow human beings and the planet itself. The central image, one of three that I created for the WE THE PEOPLE series, is a portrait of Maribel Valdez Gonzalez, a Texan of Mexican descent who was photographed by Arlene Mejorado. I collaborated with Arlene, who works on immigrants’ rights, to create this image as a symbol of hope, dignity, and humanity. The bleeding lotus is a symbol of the beauty and fragility of our planet. One of the most significant ways we can defend dignity and protect humanity in this country is to make our voices heard and VOTE this upcoming November. I created MAKE AMERICA SMART AGAIN with my wife, Amanda in 2016 as a call to action for Americans to be more involved in our democracy. Stay informed and visit dumbisovermasa.com! As always, thanks for caring.
-Shepard