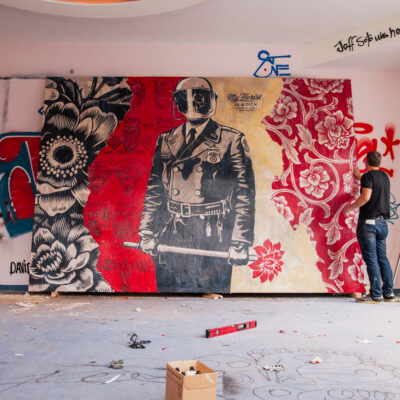 This week, I’m throwing it back to my trip to Berlin in 2015 for the Project M/8 “Freedom” show, which featured works by D*Face, Maya Hayuk, Cyrcle., Word To Mother, Miss Van, The London Police, Herakut, Snik, Evoca1, and myself! While I was there, I painted a mural with my team right next to D*Face’s, and I also created this window panel for the exhibition that featured “My Florist is a Dick,” an image I created that same year.

I’ve been making work designed to question authority and abuse of power for my entire career, including pieces about police brutality. With the number of deaths of unarmed civilians at the hands of police, combined with the militaristic and brutal response to ensuing protests, I felt the need to make this image about police brutality. The skull behind the riot mask is a reference to the aliens from John Carpenter’s They Live, which was the movie that inspired the use of “OBEY” in my work. The use of the flower and the “My Florist is a Dick” tagline are a way to bring both humor and contrast to the piece… most people would be surprised if their florist was sadistic, but it should not be so surprising when those who are drunk with power are sadistic, reminding us that checks and balances for power are essential.
-Shepard