“THE BEAT GOES ON” NEW Print by NEVER MADE 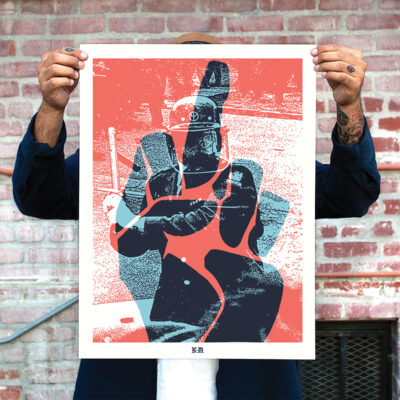 My friend and co-worker, Francisco Reyes Jr., a.k.a. Never Made, has released a screen print with a clear message on police brutality… read his statement below. Proceeds from this print will be donated to ACLU Minnesota.
–S

I’ve had this print ready to drop for a few months now. Coincidently, I scheduled it to drop the same week Daunte Wright was murdered. I contemplated not releasing it, But I’m upset with the lack of accountability on law enforcement and this vicious cycle constantly repeating.

Should Daunte have tried to run? No. Was he afraid for his life? Hell Yes. Did he deserve to be murdered? ABSOLUTELY NOT.  No one in police custody should be murdered.

I often think about how black/brown parents are having talks with their kids on how to interact with cops to make sure their kid isn’t the next victim of police violence. And how I’m probably going to have to have that talk with my future kids. It’s a scary thought.

I want to be clear that I am anti police brutality. Not anti police. Although I‘ve had more unsavory encounters with cops than I’ve had good ones. I don’t dislike all cops. I do dread them though… I have family and friends in law enforcement. And I’d hate for something to ever happen to them. Regardless, trust from the community needs to be earned and not demanded.

This print was a visceral reaction to the overuse of force on peaceful protesters last year. That, on top of the Chauvin Trial, and now Daunte. It’s all bringing up some major 2020 PTSD.

But the beat goes on…

*Proceeds from this print will be donated to ACLU Minnesota