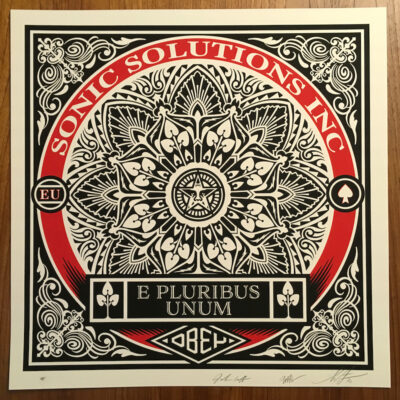 I’ve known John Goff since 1997. John used to help me screen print when I was broke and he’d never accept payment except for the Obey Giant prints we were printing. He’d also often bring in good music to listen to by Kraftwerk, Run DMC, the Stooges, the Melvins etc… I’ve worked on art for several of John’s music projects including Physics, SSI, and NØISE (which I’m part of). John is finally releasing remastered versions of the SSI albums on limited vinyl along with some limited fine art screen prints on his site. All of it is signed by me. SSI is an electronic music project John Goff does with his brother Will, another cool music nerd, and you can hear it on ssiwerks.com. There will be a limited 7” record coming later for anyone who buys all of the 12” records. I’ll be doing the art and signing that one too! It’s a good time to stay inside and play some vinyl, and it’s always a good time to support independent music, so give SSI a spin. -Shepard