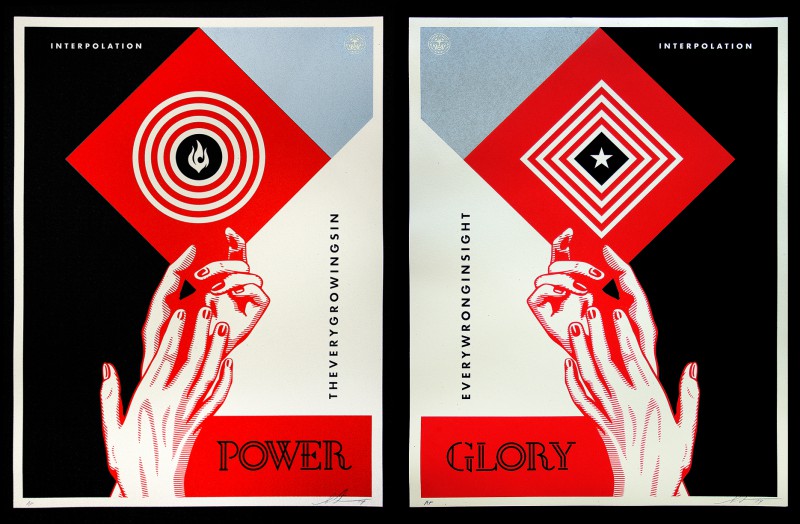 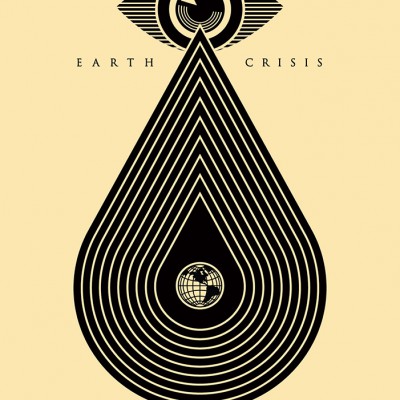 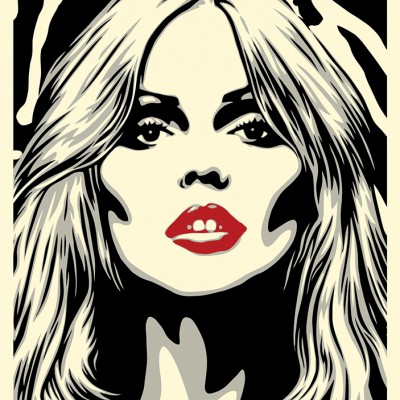 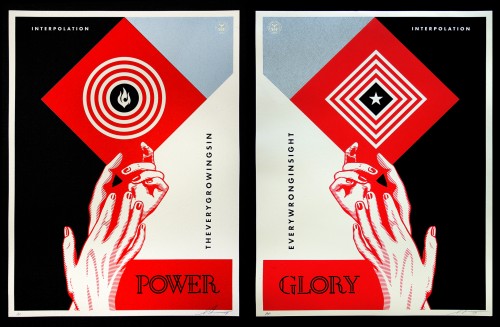 Interpolation Diptych set, signed edition of 550. The first 100 will be sold through Interpol’s website later this week (more details coming soon), signed by Shepard and the band. The remaining 450 will be signed by Shepard only and sold through https://obeygiant.com/store/, to be released Thursday, December 11 at a random time between 10am and 12pm PST. $100 per set, limit one set per person/household.

The Interpol guys and I were happy enough with our mural collaboration that we decided to make a screen print diptych set of the same art. 450 sets will be signed by me alone, and 100 sets will be signed by me and the band and available on Interpol’s website later this week. If you missed the post about my history with Interpol(the band) and our recent mural collaboration… here you go:

I picked up Interpol’s first album “Turn on the Bright Lights” shortly after it was released, based purely on the mysterious, film noir meets Blue Note (but in red), image on the cover. The music lived up to the seductive promise of the cover and I soon decided I’d found my new favorite band. I stalked Interpol backstage at Coachella and offered to create art for them if they ever needed it… to my surprise, they knew my work already and decided to take me up on my offer and have me create some art for their follow up album “Antics” in 2004. Ten years have passed since that project and after hanging with the band after their Lollapalooza gig this summer, we discussed working together again, possibly with a public art component. When “El Pintor” came out I loved the music, cover art, and the anagram device (an anagram is a new word or set of words made from the letters of another word or set of words in a different order). EL PINTOR means “the painter” in Spanish but is an anagram of INTERPOL. When approaching our new collaboration, I liked the challenge of creating an anagram from a song title. Daniel Kessler suggested “Everything Is Wrong” as the song for me to interpret. I love that song, so my thinking was to find a middle ground between Interpol’s aesthetics, lyrics for the song, and my art style and concepts. The lyrics to “Everything Is Wrong” are open to interpretation, but whether the song is about hard living, relationship failures, wear and tear on the environment, or an empire mentality, regret for poor decisions seems to be the theme. I decided to explore the idea of being complicit in a personal relationship or a relationship with a system that one realizes is unhealthy. I did an art show recently called “Power & Glory” that was a celebration and critique of Americana with an emphasis on the symbols and meanings of power. I like to question our obsession with money and the bravado that “America is the greatest country in the earth’s history”. Basically, I’m looking for an excuse to implicitly question hegemony, and “Everything Is Wrong” gave me one. My anagrams from EVERYTHING IS WRONG: THE VERY GROWING SIN and EVERY WRONG INSIGHT reflect both Interpol’s lyrics and my Power & Glory concepts. Since my mural images are interpretations of the song through my sensibility, but within parameters, they qualify as “interpolations”. It is convenient that interpolation references Interpol, but meaningfully, I think that art and music that inspire dialogue and interpretation are powerful fuel for expression and empowerment. I hope that the layers of this collaboration might make some molecules collide somehow.
-Shepard 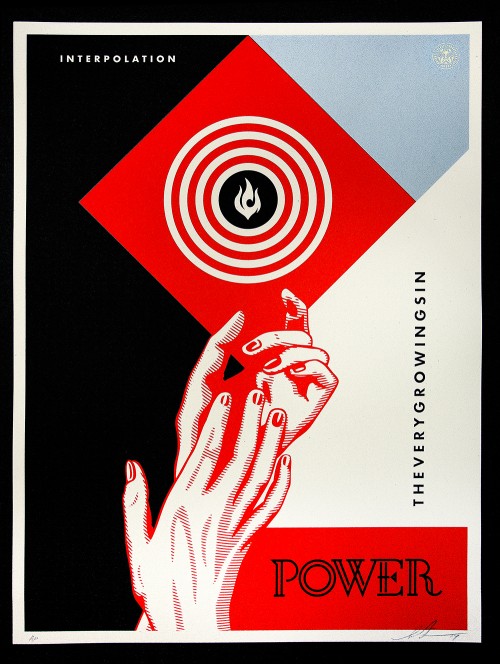 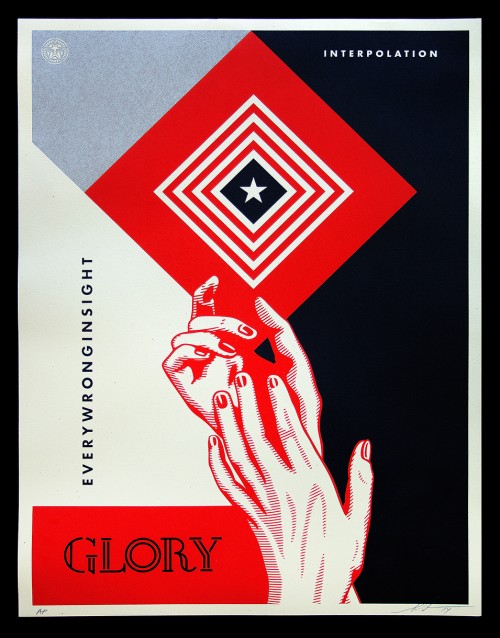 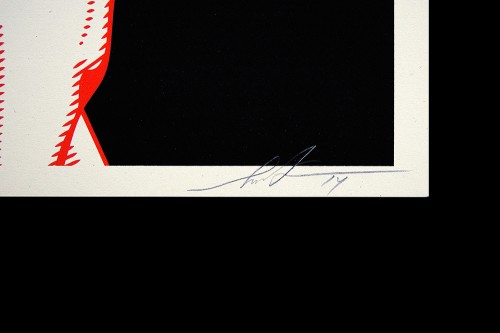 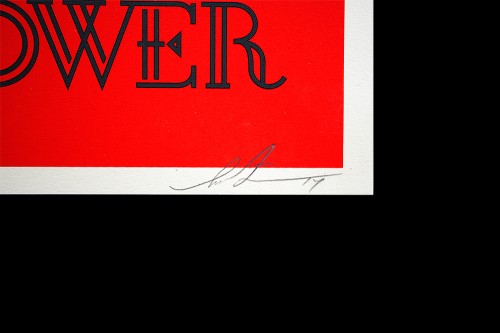 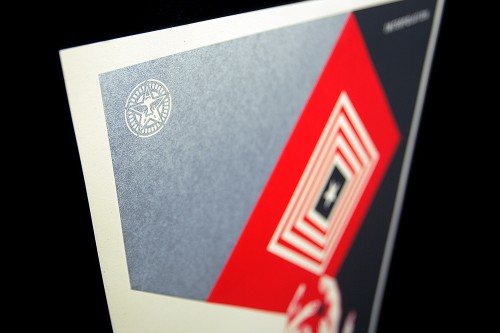 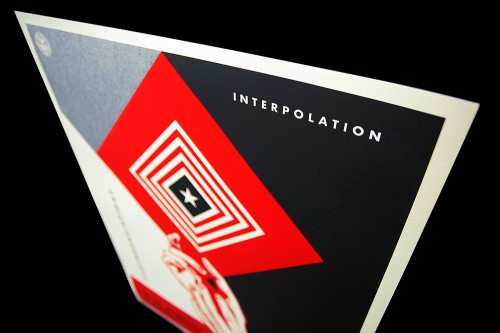 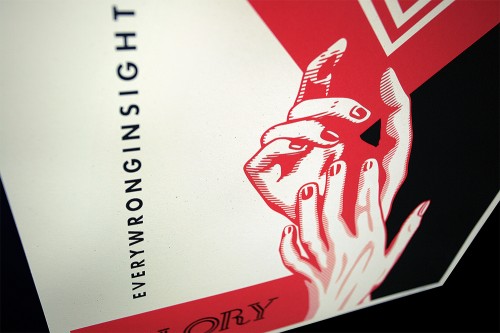