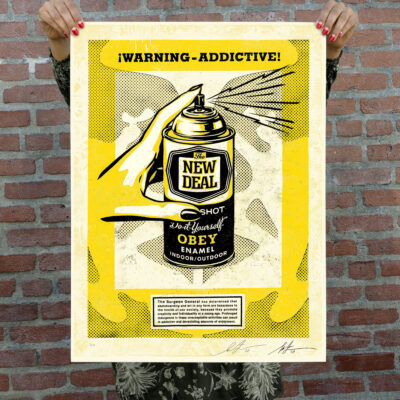 OG street artist Shepard Fairey has helped shape our modern day visual culture with iconic imagery originating in an early 90’s experiment in phenomenology featuring the infamous professional wrestler Andre the Giant. But many current day fans of the artist’s work don’t realize that as a teenager Fairey ripped on a skateboard and found early inspiration in the art and subversive voice of New Deal Skateboards, which actually helped inform his signature color palette, found today in his paintings, prints, and on murals in cities around the world.

In celebration of the anniversary of the launch of New Deal Skateboards 30 years ago, Fairey helped relaunch the brand with a groundbreaking exhibition of original New Deal art and ephemera in 2019, including additional all-new reimagined artwork from over 40 artists, inspired by the brand. Co-curated with New Deal founder Andy Howell and hailed by industry insiders as the “Cultural event of the year,” the NEW DEAL 1990 Exhibition at Shepard’s Subliminal Projects Gallery in Los Angeles brought together skateboarding legends Steve Caballero, Chad Muska, Ed Templeton, and Eli Morgan Gesner, as well as art icons including DALEK, Greg Mike, Jeremy Fish, and dynamic duo Kai & Sunny, among many others, in order to create a 2 month extended exhibition (and an opening reception to remember!).

Shepard described the exhibition as a celebration of the influence of New Deal brand and art within skateboarding, “The New Deal 30th anniversary art show was a great concept because there’s so many artists who were impacted by New Deal, who now have successful art careers. The great thing about New Deal was that when it launched, it was saying, ‘Hey, the art side is really, really crucial.’ That was something that had always been important within skateboarding, but somehow was sort of relegated to behind the curtain in a sense. Now being an artist within skateboarding is cool, you’re out front about that. To take the evolution of the culture that really New Deal was pushing from 30 years ago and look at where a lot of these artists are now, as well as younger artists who maybe the ripple effect is two generations deep, but they still were feeling the effects of what New Deal did. It’s pretty amazing.”

Describing the original painting he made for the exhibition, iWARNING ADDICTIVE!, Shepard explains, “I was trying to find the perfect hybrid of my sensibility with my Obey Icon face, with New Deal. I do a lot of illustrations using a spray can because a spray can is a tool that is essential to my art. Where there was overlap between what Andy had done for New Deal and what I do with my own work. I wanted to marry the two.

“It’s a tribute to that moment in skateboarding and how much it meant for me. I wouldn’t have potentially used the spot colors I use in my work, red, black, and white, if I hadn’t been inspired by both New Deal and then things like Russian constructivism and Barbara Kruger’s work. New Deal was a big part of that limited color palette.”

Just weeks after the NEW DEAL 1990 exhibition, which launched on September 28th of 2019, and prior to the scheduled release of a special artist series deck, art print, and T-Shirt collaboration, Shepard’s original iWARNING-ADDICTIVE! painting and 50 limited edition prints of the work from the exhibition, along with hundreds of other works of art, we destroyed in an electrical fire that took Andy Howell’s home and 30-year art and skate collection. Devastated by the loss, Andy reached out to Shepard to tell him of the news that all the art and prints had been destroyed, and Shepard responded with an offer that brought Andy to tears. “Don’t worry, man, I’ll make you another one. And we’ll get you those prints too. In fact, I bet every artist in the collection would do the same.”

Fairey’s kindness helped Andy make it through a very challenging first half of 2020, and inspired him to push through to recreate the collaboration with the artist for release at the end of summer. On Shepard’s suggestion, the release of the NEW DEAL x SHEPARD FAIREY ARTIST EDITION Capsule was aptly scheduled for September 28th, 2020, exactly one year after the opening of the first NEW DEAL 1990 Exhibition at Subliminal Projects.

Shepard describes part of the draw of New Deal for him as a teenage skateboarder and artist was the witty and playfully subversive commentary in the ads and communications, as well as his inspiration for iWARNING ADDICTIVE!, the painting on which this collaboration capsule is based. “Useless Wooden Toys, what a great name. To take what’s usually a disparaging commentary and turn it around and embrace it and say, ‘Yeah. Well, look at what we’re doing with these useless wooden toys.’

“Then there was also this Surgeon General’s warning which I slightly re-worked: ‘The surgeon general has determined that skateboarding and art in any form are hazardous to the health of our society because they promote creativity and individuality at a young age. Prolonged indulgence in these unacceptable activities can result in addiction and devastating amounts of enjoyment.’ That, for me, is kind of an encapsulation of the way skateboarders take things and subvert them and in a witty, smart way. The idea that everyone else is just a slave to the status quo or to conformity, but people who can think for themselves and create for themselves are such a threat. That was right up my alley.”

The NEW DEAL x SHEPARD FAIREY SPECIAL SUPER LIMITED RELEASE EXCLUSIVE AUTHENTIC CAPSULE POP-UP COLLECTION ARTIST EDITION features skateboard deck, art print, and t-shirt limited editions inspired by Fairey’s original iWARNING-ADDICTIVE! painting and the derivative work, which he re-created in early 2020. The collaboration between New Deal and Shepard Fairey kicks off the #newdealartistedition on the exclusive occasion of the 1 year anniversary of the 1st art exhibition celebrating the 30th anniversary of the original launch of the #newdealskateboards useless wooden toys company. Visit newdealskateboards.com to view the capsule collection as well as exclusive inerview and studio visit with Shepard Fairey, all part of his #mynewdealstory.

Shepard Fairey was born in Charleston, South Carolina. He received his Bachelor of Fine Arts in Illustration at the Rhode Island School of Design in Providence, Rhode Island. In 1989 he created the “Andre the Giant has a Posse” sticker that transformed into the OBEY GIANT art campaign, with imagery that has changed the way people see art and the urban landscape. After 30 years, his work has evolved into an acclaimed body of art, which includes the 2008 “Hope” portrait of Barack Obama, found at the Smithsonian’s National Portrait Gallery. In 2017, the artist collaborated with Amplifier to create the We The People series, which was recognizable during the Women’s Marches and other rallies around the world in defense of national and global social justice issues.

Fairey’s stickers, guerilla street art presence, and public murals are recognizable worldwide. His works are in the permanent collections of the Boston Institute of Contemporary Art, Museum of Modern Art (MoMA), the Museum of Fine Arts Boston, the San Francisco Museum of Modern Art, the Smithsonian’s National Portrait Gallery, the Victoria and Albert Museum, and many others.

In 2019, Shepard Fairey launched and toured “Facing the Giant: 3 Decades of Dissent,” a global exhibition and series of murals culminating with the 100th large-scale painted mural. “Facing the Giant” is a curated series of images chosen for their importance aesthetically and conceptually, and for addressing critical topics and themes frequently recurring throughout Fairey’s career. This selection of works touches on phenomenology, self-empowerment, rebellion, abuse of power, environmental destruction, racism, gender equality, xenophobia, campaign finance reform, the military-industrial complex, propaganda, war and peace, and economic imperialism. Since October 2019, Fairey has painted several more murals, counting more than 105 painted worldwide and many more planned before COVID-19 delays.

New Deal Skateboard Products was founded in 1990 by Paul Schmitt, Steve Douglas, and Andy Howell as a platform for its team riders and artists to freely express their creativity on and off the board. In addition to the New Deal brand, the three founders launched Underworld Element (later changing the name to Element Skateboards), Mad Circle (created by pro team rider Justin Girard), 411 Video Magazine (with team rider Josh Friedberg), and Zero Sophisto (created by Andy Howell) and other brands which have influenced skateboarding, art, and fashion culture.

Dissatisfied with suppressive board sponsors and the status quo of the skateboard industry, a group of skaters got together in early 1990 at a skate contest in Del Mar, California and plotted to change the paradigm. Fueled by the unifying desire to control their own destinies in

an anti-sport that had drawn them together with the promise of free expression, Andy Howell, Steve Douglas, and Paul Schmitt, decided that they needed a “New Deal.”

With the help of their skater and artist friends, the group secretly developed a new company that, when launched in 1990, would shock the skateboard industry. New Deal Skateboard Products, emerged as a free-thinking, creatively-driven, skater-run brand, disregarding

industry expectations, and initiating a new voice in skateboarding with a series of firsts in trick innovation, deck science, graphics, and video. New Deal also set a new precedent for streetwear with the release of Big Deals, the first baggy jeans for skateboarding, designed

by Howell, which became an iconic staple in action sports and transcended the industry as one of the first streetwear trends of the ‘90s.

Andy Howell is a legendary professional skateboarder, museum artist, and award-winning lifestyle and technology entrepreneur, with a rich history of building successful online and offline brands and experiences in skateboarding, art, fashion, beauty, technology, and youth popular culture. He has won innovation awards and accolades in multiple industries, been named by idN Magazine as one of the Top 100 Creatives Worldwide, and has been a featured speaker at MIT’s Media Lab.
For more information on Andy Howell visit his LinkedIn profile and follow him on Instagram at @andyhowell43.