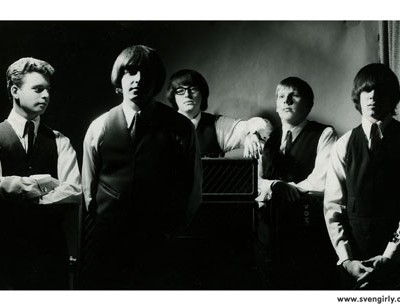 Formed in the fall of 1965, the MC5 created an explosive sound that put them at the forefront of the radical social and political scene in their native Detroit. They became the symbolic figureheads for an artist’s collective called Trans Love Energies, as well as for The White Panther Party, and embodied the character or the entire scene -subversive, extravagant, and totally hip.

The MC5 are the proud forefathers of banned albums and censored lyrics and liner notes. As a result of this and their irreverence and anti-government messages, they brought on the ire of concert promoters and the police. The legendary FBI file on the MC5 is rumored to be so extensive that there is an OSHA warning on it for anyone who attempts to lift it.

The MC5’s sound was one of pure adrenaline-addled power, a strong flavor of rhythm and blues, and a lot of teeth-gnashing lust. From The Ramones to Rage Against The Machine, Motorhead, and The White Stripes, none of this has been lost on the long list of bands that place the MC5 at the top of their influences. The MC5 is considered the prototype for American punk, hardcore, and grunge. And although the passing of Rob Tyner and Fred Smith has torn a bullet-hole in the heart of the MC5, Davis, Kramer, and Thompson are still the talented, aggressive, artistic, idealistic innovators that they have always been. They enjoy the status of living legends, but there is more work to be done, more passion to express, an American government that still needs changes, and a young American culture that still needs to be heard.

“When my wife and kids came home from the skate shop with a pair of OBEY jeans with our White Panther logo on them, I have to admit that I felt honored. Here was our symbol meaning something to a true artist. I mean Shepard Fairey is one of my heroes. He saw the White Panther as more than a logo, he saw it as a symbol of something righteous, a vision of something for the people. It looked almost sacred on those jeans. I admire Shepard because he has achieved so much on his own terms. He manages to create these beautiful images with very disturbing and complex themes. Having the opportunity to work shoulder to shoulder with Shepard on this collaboration, to carry our collective ideals to a new generation, is more exciting to me than anything I have done with my bass strapped on. My hope for this collaboration is that my buddy Shepard and I can help get everybody hip to the American Ruse.”
– Michael Davis

“I searched out the MC5 many years ago because they were very frequently referenced by later generations of punk bands I was into. Along with their Detroit brethren, The Stooges the MC5 were hugely influential for most of the bands and accompanying counter culture music scene that has defined punk and garage rock since. At first I just loved the MC5’s music but as my knowledge of their politics grew I was excited by their connection to the Black Panther Party through their own White Panther Party. I’ve always loved when music, politics, and art come together in a powerful way, and the MC5’s White Panther logo is the perfect final visual representation of their trinity of music, politics, and art . I met Michael Davis, bassist of the MC5 when his wife Angela Davis (not related to Black Panther Angela Davis, but an awesome coincidence) basically busted me for using the MC5 White Panther logo on an OBEY Clothing label. It was the nicest bust ever because she said she and Michael and their son were fans of Obey and that we should do an official collaboration. I wish all my busts ended up this well! I’m honored to present the OBEY/MC5 collaboration and I think the result embodies the spirit of both. Who wouldn’t want to be part of KICKIN’ OUT THE JAMS motherfuckers?”
– Shepard Fairey