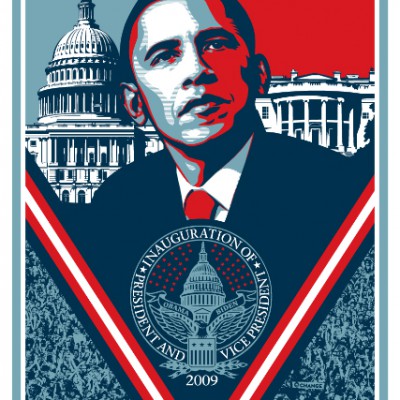 In addition to hosting the Manifest Hope: DC Extravaganza, Shepard took the time to design the official Inaugural Poster for President Elect Obama.  The limited edition prints are available as we blog, so hurry and get your part of history!  Don’t forget to visit the Manifest Hope: DC website to get the latest on the events during Inauguration.

WASHINGTON, D.C. – A limited edition print designed by Los Angeles artist Shepard Fairey in honor of President-elect Obama’s Inauguration is now available for purchase on the Presidential Inaugural Committee’s website. A run of only 10,000 numbered prints have been made of this special illustration commemorating the Inaugural occasion.  Fairey’s new design can be viewed and purchased by visiting the PIC online store at http://pic2009.inauguralcollectibles.com/category/SHEP.html.

“Shepard Fairey has captured the hope and excitement that is building across the country for President-elect Obama’s Inauguration,” said PIC Spokesperson Brent Colburn.  “We are honored that he has offered his unique talent and vision to help mark this historic event.”

Shepard Fairey’s red, white, and blue “Hope” illustration, replicated on thousands of t-shirts, signs and buttons during the 2008 campaign, was one of the most identifiable symbols of Barack Obama’s historic run for the White House.  Just yesterday, the Smithsonian announced that Fairey’s original work will become a permanent part of the Smithsonian’s collection and be displayed in the National Portrait Gallery by Inauguration Day. Fairey also designed the portrait of President-Elect Obama featured on the cover of Time Magazine’s “Person of the Year” issue last month.

The print, on sale now, is 24″X36″ in size and costs $100. One thousand of the prints have been signed by the artist, and are available for $500. T-shirts, buttons, stickers and lapel pins with the new image are also be available at the online store. A limited number of posters with the image will also be distributed as gifts to grassroots donors for small contributions. 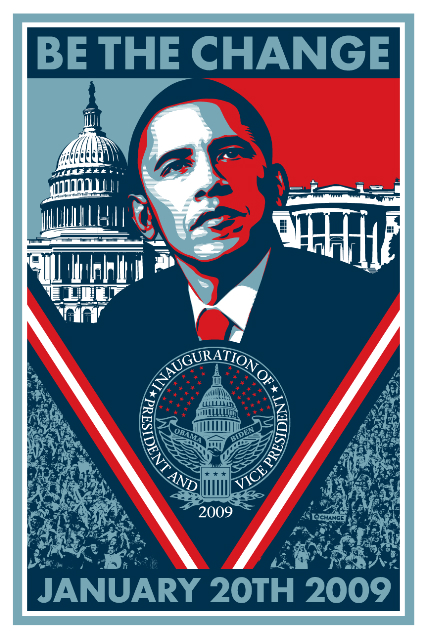