Cleon Peterson | There is a War | The Outsiders London 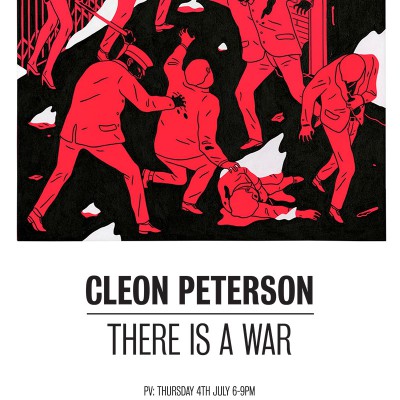 Cleon Peterson’s nightmarish tableaux feature scenes of a barbaric holocaust, where might is right and the weak are merely souls with holes for the strong to torment and abuse. Deviance is the norm, and the displaced individual is forced to navigate this wicked world alone, finding hollow bits of pleasure and meaning in violence, sex, religion and drugs.
Although the 39 year-old California artist chuckles, “My work doesn’t just contain violence, there’s a humour to it – the images are so over the top.” A horde of uniform bad guys, at once ethnic, gothic and alien rampage through the works, sacking small the metropolis within and wantonly abusing its law-abiding residents. These bogeymen are so comically stereotyped as to infer that oppressors take many forms, throughout history to the present day, from slavers and plutocrats to bullies and witch-hunters. 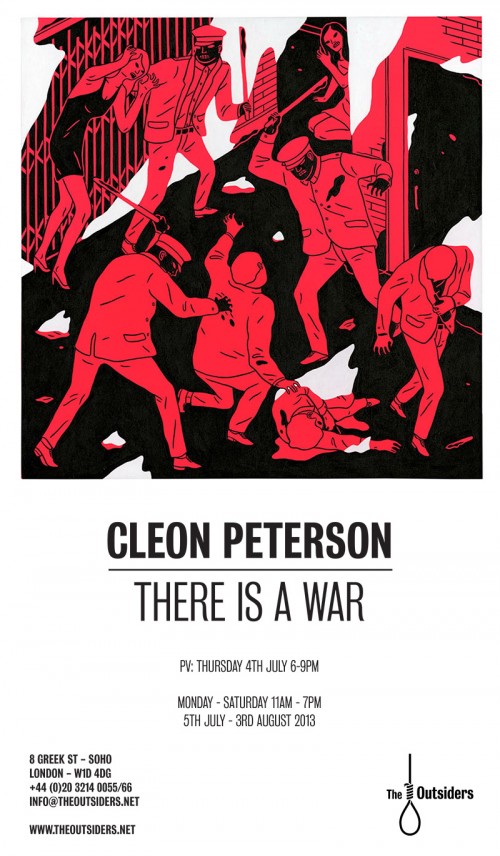 It should be stressed though that Cleon’s work is not necessarily “gross-out art”. The atrocity is in the scenario, not what Hollywood dubs “the action”, which is far from graphic. There are no genitalia, or intestines, and any blood is uncoloured in the tradition of the self-regulatory Comic Book Code.
But Cleon Peterson’s work doesn’t simply challenge contemporary notions of beauty and horror. It challenges: period. Viewers are confronted by more than just his vaudeville villains, relishing the finer details of rape and pillage. The work forces us to ask of ourselves some of the most pertinent questions plaguing sensitive Western gallery-goers today. Is there any genuine good in the world? Would I be much better off as a bastard, if I could get away with it? Am I a racist? Am I a pussy? The mind races. 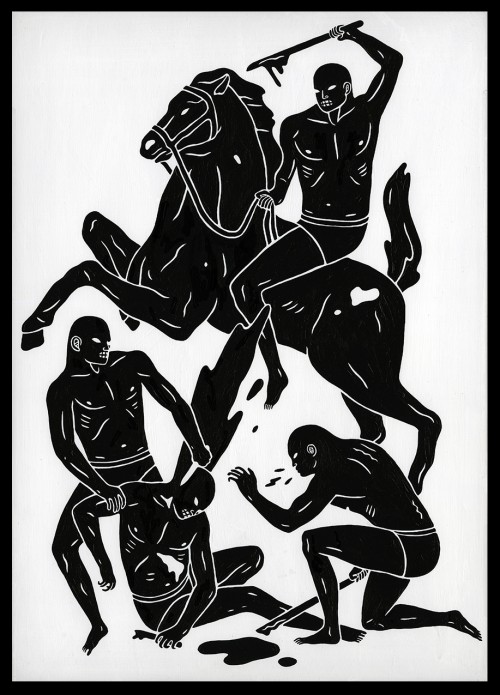 Cleon himself prefers his work to be ambiguous. In other words, he’d like you to dig up some personal neuroses to examine on top of those most clearly prompted by his own, anxiety-ridden world. But the artist does admit to being ”drawn” to questioning the benefits of a civilised society. He alludes to the classical myth of god of wine and festivities, Bacchus, “Which is all about the moral constraints that society, or your own psyche, put upon you, and giving in to animal instinct and lust,” in a similar way to the novels of JG Ballard. But what the thirty-something California artist is most at pains to point out that his art “Isn’t just about repressed emotions. These horrible things are actually happening – whether it’s in downtown LA or central Africa.”

Cleon Peterson grew up as a skateboarding “ave rat” (avenue rat) in Seattle. His notoriously liberal upbringing is examined in the work of his art photographer brother Leigh Ledare, in whose pictures Cleon himself often appears.
Cleon cites a decade of drug addiction, and the anti-lifestyle that accompanied it, as first-hand experience of cruelty and indulgence. Artistic influences include Leon Golub, Paul McCarthy, and Mike Kelly. Cleon uses acrylics and spray paint (“it provides a flat finish”) to create his works on paper mounted on board.
By day Cleon is associate creative director at Shepard Fairey studios. He has three young children: Aubrey, Colette and Huxley. Aged 39 he lives in the mountains above Pasedena with his family.
www.cleonpeterson.com 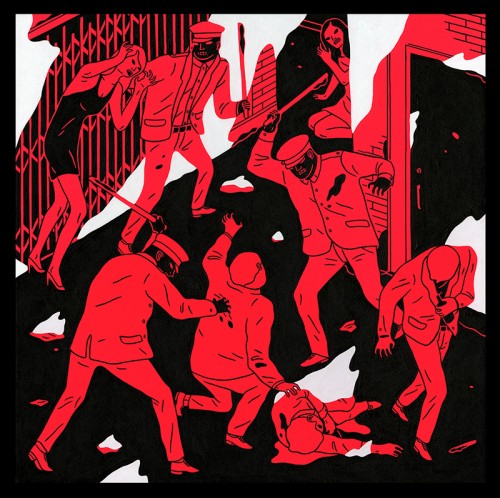 The Outsiders galleries sell affordable original works from the Lazarides stable of artists. Emerging talents are showcased alongside experimental and boutique projects from established names. The exhibition schedule focuses on work produced by artists who thrive “outside” of the orthodox gallery system. The Outsiders project was launched in 2008, with a group show in New York that attracted more visitors than a corresponding Gilbert and George retrospective at MOMA NY.
The two spaces in London and Newcastle-upon-Tyne occupy the sites of Lazarides’ original galleries. Having hosted some of the earliest gallery showcases by the likes of Banksy and Jonathan Yeo, and the first European exhibitions by American artists including David Choe, they boast a proud heritage on the contemporary urban art circuit. Artists exhibiting recently include Antony Micallef, Conor Harrington and Invader.
The book Outsiders is out now published by Thames & Hudson and the organisation is featured in Oscar-nominated documentary Exit Through the Gift Shop. A dedicated print studio, Execution Dock in east London creates all the gallery’s editioned works. Incorporating the thriving online art store www.theoutsiders.net, The Outsiders welcomes over ten thousand visitors annually.