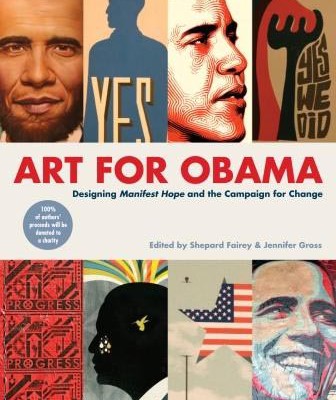 In conjunction with the themes of hope and change, all of the authors’ profits from this book will be donated to Americans for the Arts (http://www.americansforthearts.org/) charity.

Few events in recent memory have captivated the world’s attention like that of Barack Obama’s historic presidential campaign. Not only did it stir passionate political momentum, but it also inspired an array of creative arts from a world of artists, illustrators, and graphic designers. Shepard Fairey’s iconic “HOPE” portrait became the face of the campaign, prompting a personal thank-you note from the president, which is included in ART FOR OBAMA (Abrams Image; October 2009; $22.50 US / $29.50 CAN; ISBN: 978-0-8109-8498-1). In conjunction with the themes of hope and change, all of the authors’ profits from this book will be donated to Americans for the Arts (http://www.americansforthearts.org/) charity.

Innovative portraits and graphic designs from artists around the country became a powerful symbol of the country’s desire for change, and engaging artists-from the grassroots level to the international level-became a central strategy to inspire passion and win the presidential race. In ART FOR OBAMA, Fairey showcases 150 of those powerful images from the campaign, including works created by well-known artists such as, Ron English, David Choe, Kwaku Alston, Maya Hayuk, Justin Hampton, and Shel Starkman. The Manifest Hope art shows, which took place in Denver during the Democratic National Convention and Washington DC preceding the inauguration, featured artists who used their talents to motivate the grassroots movement that carried Barack Obama to victory. The shows were put on by Evolutionary Media Group, Obey Giant, MoveOn.org, Political Action, SEIU and Studio Number One.

ART FOR OBAMA is comprised of collages, paintings, photo composites, prints, and computer-generated pieces, showcasing the well-known images of the campaign as well as less famous, but equally creative pieces from around the globe. This is a volume for design and art aficionados, as well as supporters of the forty-fourth president of the United States who want a keepsake as uncommon as his extraordinary campaign. 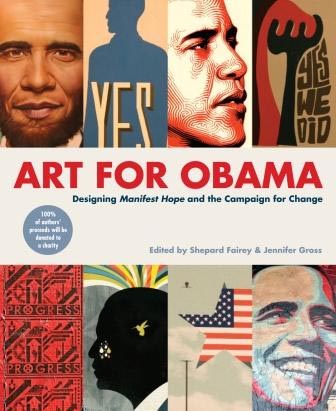