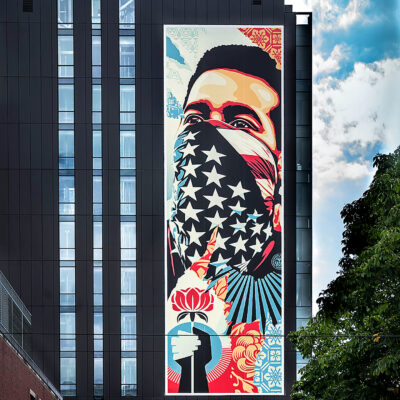 I’m honored to partner with Ultra Violet Arts and 9th & Thomas for this new installation in Seattle, Washington, at 234 9th Avenue North in South Lake Union. If you’re in the area, go check it out!

“American Rage” was created based on a photo by Ted Soqui taken in 2014 during a Black Lives Matter protest. The image is equally as emblematic of the current wave of protests for racial justice and police reform that the nation has been experiencing in the wake of the murder of George Floyd by the Minneapolis police. I remember, at the time, 28 years ago, feeling enraged that blatant acts of police brutality inflicted on Rodney King went unpunished even when it was captured on video. It is heartbreaking to me how frequently similar acts of violence and abuse of power by law enforcement have gone unpunished, even when caught on camera. I was ecstatic that enough people were distressed by what happened to George Floyd, and what has happened to countless unarmed people of color at the hands of the police, to hit the streets in peaceful protest. Protest is a noble use of free speech, protected as a civil right, and is as American as apple pie. This “American Rage” image is a celebration of protest as a form of civic participation in democracy. I don’t ever condone violence or looting, but I understand why things can reach a boiling point when people feel that the American system has failed them over and over. Martin Luther King Jr. said, “A riot is the language of the unheard.” King also condemned politicians who “are more devoted to order than justice.” I urge people not to conflate peaceful protest with “criminal agitation” or “inciting a riot.” When the system fails the people, it is nothing short of patriotic for the people to protest for a solution. It is also essential that people vote!