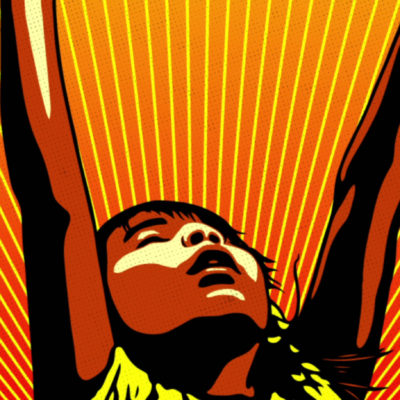 I was honored to be asked by Robert Plant to work on a video for his beautiful song “New World.” The video features several of my images and my friend Ernesto Yerena’s images focusing on the impact of imperialism on Native Americans, the environment, and sacred natural resources. Many of the works are inspired by photographs from Aaron Huey, with whom Ernesto and I have worked on several native rights initiatives. I was very motivated to work on this project not just because Robert Plant is a musical hero of mine (I’ve designed two Led Zeppelin covers!) but because I think “New World” is incredibly powerful musically and lyrically. Music has the magical ability to take the listener on a journey of feelings and thoughts that might not otherwise be experienced. I am inspired that Robert would use his musical gift to address the moral baggage of European imperialism. I’m a champion of social justice, and as a white American of European descent I am deeply aware of the shameful transgressions and hubris of “manifest destiny.” I’m moved that Robert addresses this history in the lyrics and video for “New World” and has chosen to support Honor The Earth with proceeds from the song. I hope “New World” nudges us to ponder the hypocrisy of some white Americans, all of whom are descended from immigrants, showing too little empathy for current immigrants or the natives whose lives have been tragically impacted by attitudes of European supremacy. Check out Honor The Earth to see the work they are doing at the intersection of native and environmental rights.
-Shepard

“Every day our senses are assaulted by the ridiculous. It’s not so long ago that today’s plots and wrangles between nation governments would seem too far-fetched to inspire a Hollywood blockbuster. The perversions and struggles leave a shadow over the spirit of the people and the land. It’s not an original sin. Every era bears the burden of chaos and warmongering. Time immemorial.

“New World” is a comment on a recent history of conquest and submission. How fitting that Shepard Fairey, Aaron Huey and Ernesto Yerena complemented our music in such a way. They are artists of great conscience and sensitivity. I’m most grateful. I’m also pleased to add my support to HonorEarth.org.”
– Robert Plant