A Video and Words From Julian Marshall 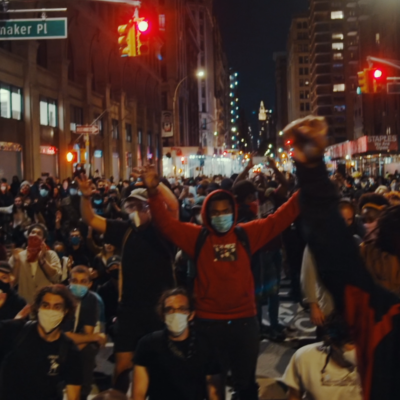 “I woke up on Saturday morning in complete distress, outraged by the murder of George Floyd. At the same time, I was paralyzed, terrified to protest because of coronavirus. After hearing the words of Killer Mike and Cornel West, I realized that it was my duty to use my craft to help people cope with, process, and channel the emotional fire brought on by this injustice. We have to use this energy productively. We cannot use this energy to burn our house down. The following film chronicles my neighborhood’s overwhelming response to the death of George Floyd. #blacklivesmatter #wearegeorgefloyd” – Julian Marshall

Julian Marshall interned with me 10 years ago while attending RISD. He’s been documenting protests and made a compelling video of the current #BlackLivesMatter protests. The intensity conveyed by the footage, and the wise commentary from Killer Mike and Cornel West about a path forward are juxtaposed, leaving you feeling the gravity of this powerful moment, and how critical the push for justice is. – Shepard

Background:
Julian has had a lot of experiences with the police throughout his life.Both positive and negative.
Growing up in D.C., where police are very hostile towards skateboarders, he has himself been the recipient of systemic racial injustice and police brutality. He has been tackled, and has had knees in his back, etc…
But, he admits that, in other cities, he has also been protected by the police at times.
While shooting a recent narrative project for Price Waterhouse Cooper about racial profiling, Julian spent a lot of time talking to LAPD officers, who were providing street lockups for the set, utilizing their expertise to make the shoot more realistic. From their conversations, he learned about their protocols and point of view.
Julian’s apartment happens to be located at ground zero for the violent rioting in the East Village, NYC. Watching the madness unfold in front of him, he didn’t sleep Friday night. Saturday morning, he decided that he needed to do something.
Fresh off the heels of a campaign for BET that was a call to action for voters (featuring the artist T.I.), Julian is a strong advocate of utilizing one’s vote for change. He believes that the top priority is to beat Donald Trump in November, but that he is merely a figurehead for systemic racism. He believes that the true thing we are voting for is the soul of the judicial system.
“It’s down to the local communities to install people that have the same values and drive to level the playing field. That being said, there are a lot of people, who may not share our immediate values, that we need to bring onto our team, both in the general public and, in this case, the police force. But we need to put people in a position where they want to listen to us, and that will require empathy and strong communication.”
Inspired by the position of political candidate, Andrew Yang, he agrees that there needs to be a reworking of government, at all levels, to prioritize the wellbeing of all Americans.
So – he went out to the street, with this specific point of view in mind.

The Goal of the Video
Julian wants to help the movement respond in a way that is productive and fair.To acknowledge abuses of power, but in a way where people can channel energy productively to solve the problem.
“We need this momentum and public outcry to beat Trump. With unprecedented levels of unemployment in the wake of the quarantine, and the seemingly endless wait for relief and stimulus, people are so fed up that they don’t know what to do. Quarantine has made people feel powerless against a system that has not been working for them. But to destroy property on top of the damage the pandemic has already inflicted is only harming the ability to have productive conversations between sides.”
He wants to show that there are ways to change things. “Now is the time to be tactical.”The situation is bad for everyone; “we need to empower good cops to stand with us because this is bad for them too.”
The enemy is systemic racism. “Specifically, the “system” in our country has been manufactured  to subjugate people both racially and socioeconomically–that’s what we need to fight.”
“Regardless of where we live or our socioeconomic background, we need to find a common language. This means carefully listening to people who are different from you, and speaking a language that enables constructive conversations.”