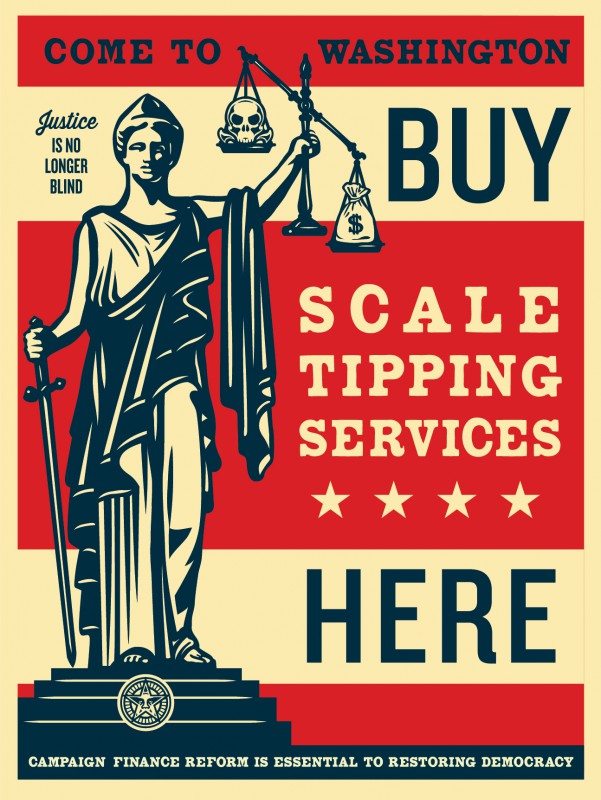 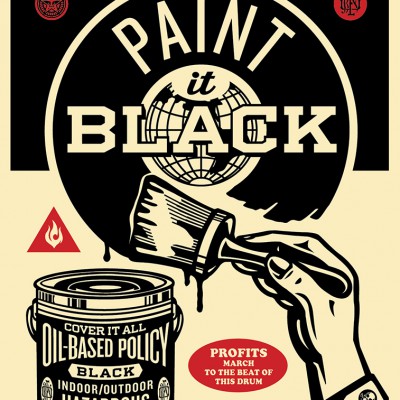 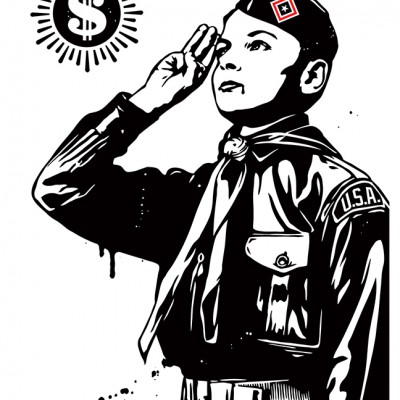 I have frequently talked about the many problems created by the current campaign finance structure. Corporate donations distort their influence in politics and corrupt our democracy. This is an issue not many Americans seem interested in, but it effects all Americans by insuring that corporate interests are put before the interests of the average person. Genuine democracy should guarantee that politicians create the greatest good for the greatest number of people, but that idea has eroded with the favors owed by politicians to corporations in exchange for their contributions. A portion of the proceeds from the “Scale Tipping Services” print will go to two organizations who are fighting  against political corruption, and for campaign finance reform. They are rootstrikers.org and unitedrepublic.org. Check out their sites and the quotes below from Rootstrikers Lawrence Lessig and United Republic’s Josh Silver. These orgs are doing great work, so please support them! Thanks for caring.
-Shepard

18 x 24 inch screen print.  Signed and numbered edition of 450.  $55.  A portion of the proceeds will be donated to rootstrikers.org and unitedrepublic.org.

Rootstrikers apply Thoreau’s quote -” for every thousand hacking at the branches of evil, there’s one striking at the root -” to the catastrophe that is our government today. The root is the corrupting influence of money in our politics. It’s reform is corruption reform. With love and respect, we think that’s a more meaningful term than “campaign finance reform.” To call this a problem of “campaign finance reform” is like calling an alcoholic a person with a “liquid intake problem.”

We have had thousands of active volunteers enlist in just the past six weeks in response to the powerful video we premiered at Barclays Center in NYC. We are training them and thousands of others around our organizing strategy; grounded in these six core assumptions:

With these assumptions, our campaign operates in three divisions: 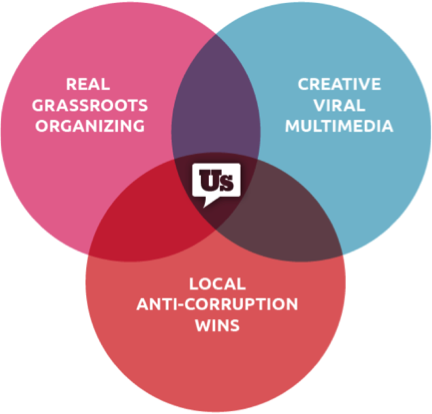 We had planned to run a Montana Anti-Corruption Act ballot initiative this year, but a conflicting ballot measure caused us to stay off the ballot in 2014. An anti-voting rights initiative -“ referred by the Montana legislature -“ will be on the ballot, and framed as an “anti-fraud” measure. Ours, of course is an “anti-corruption” measure. Having a bad anti-fraud initiative, and a good anti-corruption initiative on the same ballot is confusing, and potentially harmful to voting rights.

This is particularly frustrating after our February poll amongst likely voters in Montana revealed stunning levels of support for the Act: 85% of Democrats and 83% Republicans. In 32 years of polling, our pollster has never seen numbers this high for an initiative, calling ours virtually impossible to lose. This validates our central theory that we must introduce comprehensive reforms with popular lobbying, ethics and transparency provisions at the front of the parade, and public funding quietly in the back. We employ the “tax rebate” version of public funding because it is the most simple, most popular with moderates and conservatives, and most resistant to political attacks. We are now turning our attention to introducing an Anti-Corruption Act in another state and a handful of municipalities next year. With polling numbers as high as ours, we can and will emulate the successful strategies employed by marriage equality and marijuana reform advocates over the past two decades: passing Anti-Corruption Acts in cities and states across the nation, en route to federal reforms.

Crafting the Montana Anti-Corruption Act led us to a revelatory takeaway: top shelf constitutional and campaign finance lawyers concluded that the tax rebate public funding model may be directed toward state legislative, statewide, judicial and federal candidates from that state. This conclusion is replicable in other states as well, and reveals a potential game-changer: passing state-based Acts would begin creating federal public funding state-by-state-¦a smart end-run around the U.S. Congress.

Our short-term challenge is to ramp up capacity in the correct areas of operations. We just expanded our organizing team from one to four staff and several interns. We have a new engineer working on stronger online membership conversion rates. Now we’re beefing up our multimedia team, expanding from one to three producers and editors.