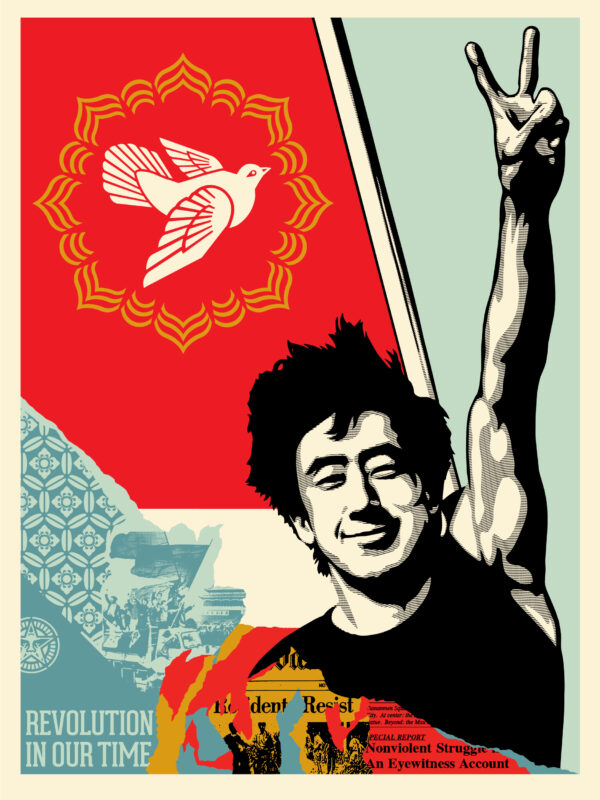 Revolution in our Time

Oct 1 is the 70th anniversary of Communist Party rule in China and the Chinese government is planning an extravaganza of choreographed contentment in the mainland while the people of Hong Kong will hit the streets in an effort to secure their rights. I’ve long believed that protests in the streets are an essential tool for meaningful change because the passion, courage, and visceral force of the participants in a mass protest send a powerful message that they are fully committed to their cause! Ed Nachtrieb photographed many incredible moments of the 1989 Tiananmen Square protests. I’m honored to collaborate with Ed on a set of two images based on his documentation 30 years ago, especially because pro-democracy and human-rights protesters are in the streets of Hong Kong right now! This image “Long Live The People” will be released as a print soon… more details to come. Check out Ed Nachtrieb’s thoughts on the 1989 Tiananmen Square protests. -Shepard

Thirty years ago in Beijing, idealistic students risked everything, including their lives, to make a passionate stand for human freedom in the face of an overbearing state. As they cried out “Long Live the People,” waves of them outstretched their arms and thrust out two fingers to signal “victory.” They were fearless.

I was the Chief Photographer for Reuters News Pictures in China at the time and lived in Beijing. My favorite images of the 1989 protests reflect the participants’ idealism in the face of overwhelming odds and are now elements in these works by Shepard Fairey.

Singing patriotic songs, students locked arms and charged into a series of police phalanxes blocking their entrance to Tiananmen Square (image at the bottom, middle). Once they occupied the square, parades of ordinary citizens took to the streets to wave victory signs (top image) while Communist Party bosses met behind the walled gates of their Zhongnanhai headquarters to plot a response (bottom right).

After the People’s Liberation Army was sent in to suppress what is now called the “pro-democracy movement” on June 4, 1989, there was a liberalization of economic rules and policies. China then experienced a remarkable economic transformation. The idea: if people could get rich, they wouldn’t care so much about their freedoms. I think that’s a miscalculation. In Hong Kong today, ideas championed in 1989 have reappeared in a “Revolution of Our Time” in spite of the campaign to erase such “counter-revolutionary” thoughts from history.

My images used in these prints are from energetic and optimistic moments of the pro-democracy movement. Victory was in the air. Progress seemed inevitable to those with arms outstretched and smiles beaming from their faces. Shepard’s work reflects their hopes and aspirations. The same ones that fortified those protesters in 1989 are now fuel for the passionate idealists on the streets today.