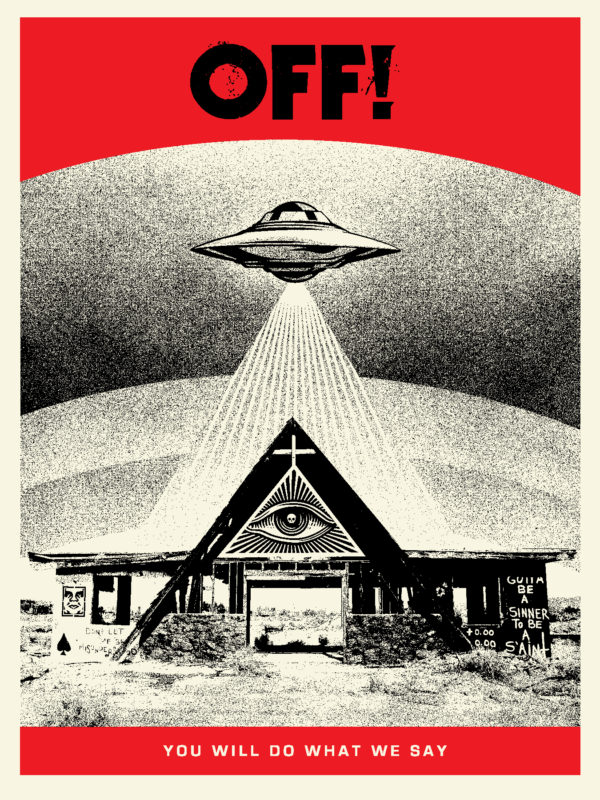 OFF! YOU WILL DO WHAT WE SAY

Punk rock band OFF! which includes members from Black Flag, Circle Jerks, Redd Kross, The Burning Brides, and The Black Heart Procession is making a movie called “Watermelon,” and according to their lead singer Keith Morris, “You will do what we say”…… is an MK Ultra mantra from out of the shadows, under the hardwood and the linoleum floorboards or a ray of light into the center of the brain. Worship at the church of the central intelligence agency! – These cryptic words were all I could get from Keith because Watermelon is, of course, a top-secret project about mind-control which might already have me hypnotized. I originally created this print for their Kickstarter for the film which they barely fell short of funding. I want to see this OFF! Watermelon project come to fruition, so. I’m now releasing a limited run of these prints on my site to raise money for it, July 11th. Don’t miss it!

18 x 24 inches screen print on true white Speckletone Paper.  Signed by Shepard Fairey. Numbered edition of 600. All proceeds will go to OFF!. SOLD OUT!