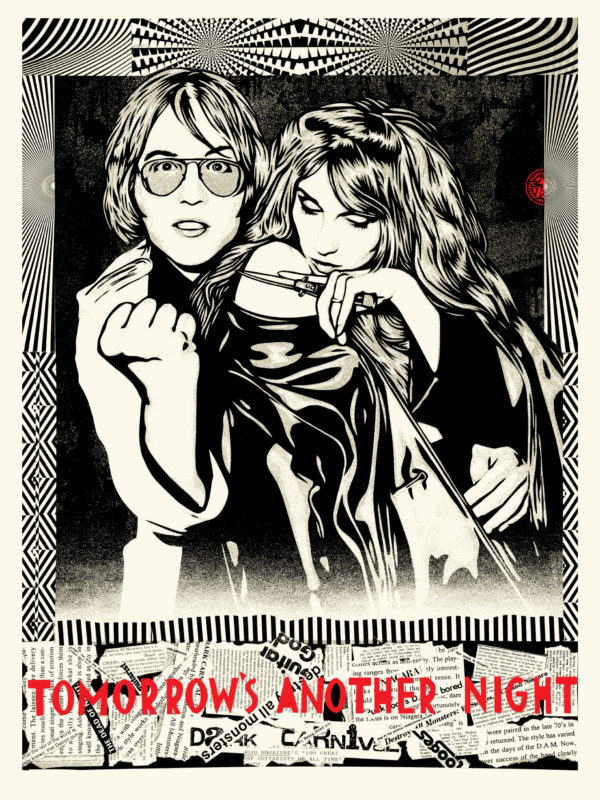 The Stooges made a lot of my favorite music, so of course I’m a huge fan of their guitarist Ron Asheton. I’ve also been a big fan since the ’90s of the artist Niagara Detroit who makes very stylish, pop-noir paintings with a dark sense of humor and sly wit. What I did not know until maybe 15 years ago, is that Ron Asheton and Niagara, both hailing from Detroit, were romantically and musically entangled! They played together in Destroy All Monsters and Dark Carnival… both great post-Stooges bands. I’ve become friends with Niagara, so we decided to collaborate by both making Ron and Niagara portrait art, which we’d then hand over to the other to enhance/destroy as they saw fit.

I chose an image of Ron and Niagara where I think they both look amazing, but there was a nice balance between in-your-face aggression with Ron’s pose making eye contact holding his fist up, and Niagara’s seemingly demure embrace of Ron, but anyone who knows Niagara understands that though she may look sedate, she’s pulling the strings. I added a switchblade that she is caressing with her finger, as a way to amplify her femme fatale chic, and because I thought it lent itself to my original idea of a title ‘Bonnie & Clyde Were Lightweights’.” – Shepard⁠