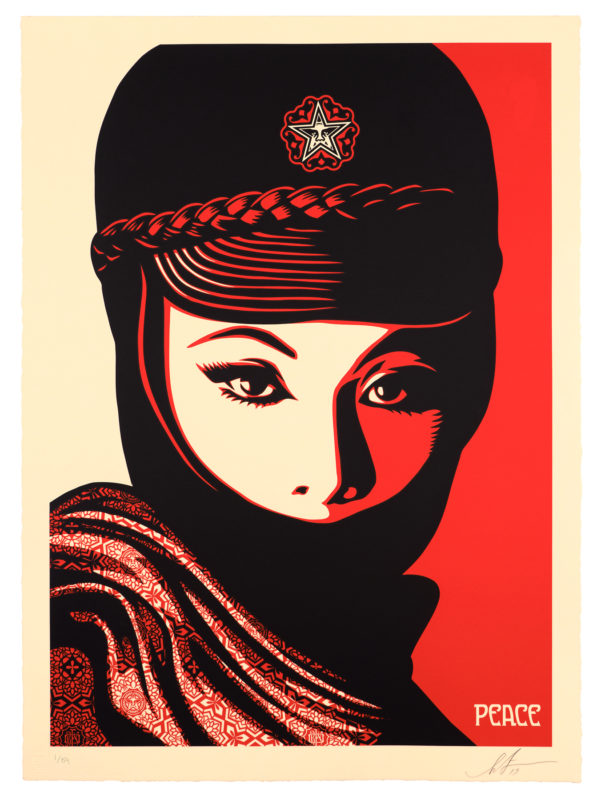 The masked woman, her face covered and partially shaded, is mysterious. She looks directly at the viewer with determination. Her ethnicity is undetermined; the viewer can project their identity on the figure. The use of the word “Mujer,” “woman” in Spanish, and the mask is a nod to the Zapatista movement in Southern Mexico, and armed anti-globalization group that rebelled against the Mexican government demanding indigenous rights and democracy. The eyes remind Fairey of Emma Peel, played by Diana Rigg, the heroine in the 1960’s television program, The Avengers. The work is a celebration of feminity, as audacious and assertive women portrayed in 1960’s spy films. In 2005 Shepard and his wife Amanda became parents. As the father of two daughters and married to a woman with a strong character, Fairey addressed sexism by rendering images of powerful, defiant women. His portraits of women are in part of a projection of his daughters, a reflection of his wife and an assault on historical portrayals of women appearing nude, powerless, and submissive.

Mujer Fatale. Serigraph on Coventry Rag, 100% Cotton Custom Archival Paper with hand-deckled edges. 30 x 41 inches. Signed by Shepard Fairey. Numbered edition of 89. $900. Comes with a certificate of authenticity. Available Tuesday, July 23rd @ 12 PM PDT at store.obeygiant.com/collections/prints. Max order: 1 per customer/household. *Orders are not guaranteed as demand is high and inventory is limited.* Multiple orders will be refunded. International customers are responsible for import fees due upon delivery.⁣ ALL SALES FINAL.