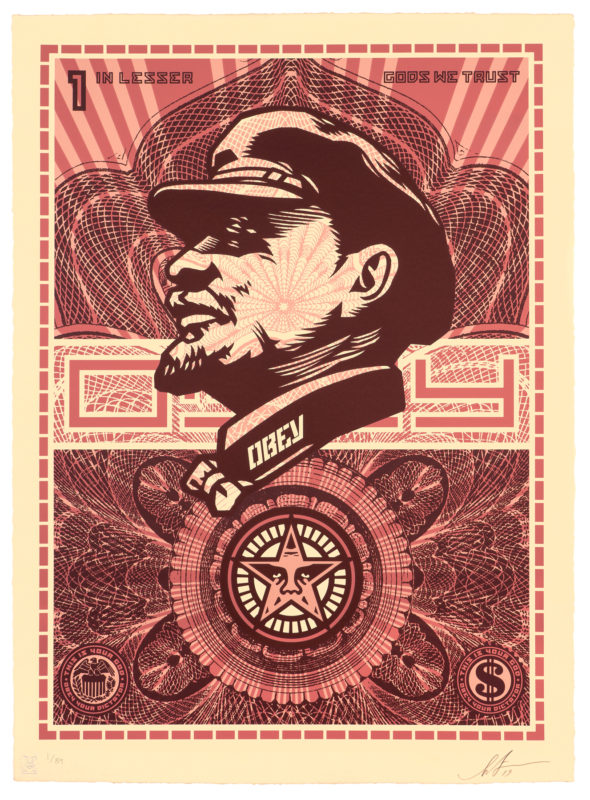 The combination of the foreign leaders and a US President is intended to remind the viewer that we must not only look outside our nation for those who abuse powers but must be vigilant in our own country as well. Although these works were made during the Bush administration, in the current tumultuous political climate of the Trump administration, the message is more important than ever. The portraits are a cautionary reminder, urging the public to question authority and be properly informed. Reminding us that truth and power cannot be reconciled. Those who want to control society will inevitably create fictitious narratives to do so.

Lesser Gods Lenin, Lesser Gods Mao, and Lesser Gods Nixon SOLD AS A MATCHING NUMBERED SET on Tuesday, September 24th @ 10 AM PDT at store.obeygiant.com/collections/prints for $2,000. SOLD OUT. Remaining inventory sold individually at 1 PM PDT, $900 each. Serigraph on Coventry Rag, 100% Cotton Custom Archival Paper with hand-deckled edges. 30 x 41 inches. Signed by Shepard Fairey. Numbered edition of 89. Comes with a certificate of authenticity. Max order: 1 per customer/household. *Orders are not guaranteed as demand is high and inventory is limited.* Multiple orders will be refunded. International customers are responsible for import fees due upon delivery.⁣ ALL SALES FINAL.