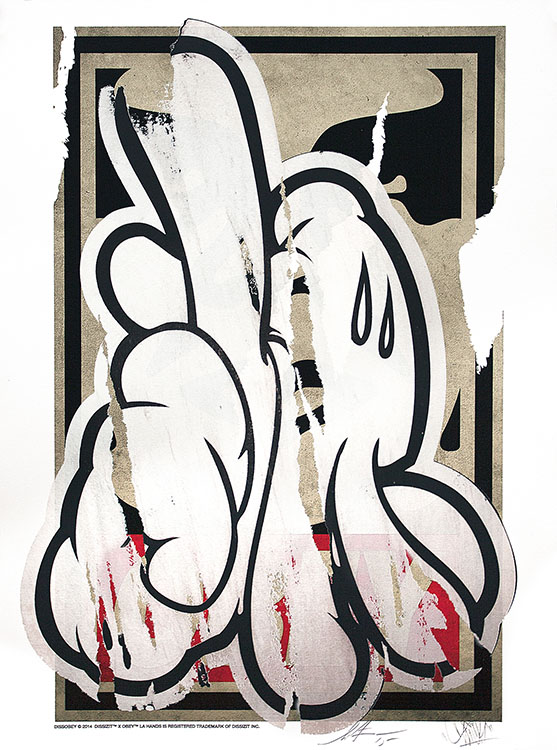 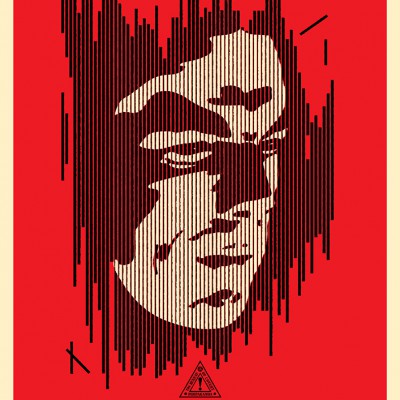 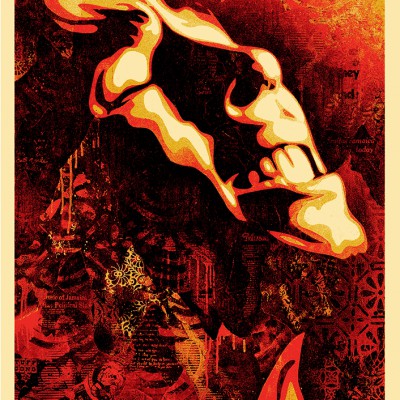 I have been a fan of Slick’s graffiti and graphic design since the early 90’s. I was following graffiti of course, where Slick’s street work was legendary, but I also followed the emergence of streetwear brands like X-Large, Third Rail, and Fuct, all of whom Slick did great tee graphics with. I was impressed with Slick’s artistic versatility and his choices of references and subversive twists in his graphics. I finally met Slick about 12 or 13 years ago at an art show at our gallery. He was cool to my face and then did a big drippy tag in our elevator. I didn’t really care except that our landlord said our art shows were attracting “the wrong element” and warned us to keep things clean. After that, Slick and I bumped into each other pretty regularly and at some point he told me he was doing a Buckwheat “OTAY” parody of OBEY. I was flattered and I enjoyed seeing some of the prints around LA. When Slick and I talked about doing an “official” collaboration, we liked the idea of an homage to creative competition and transgression. You either learn to love the chaos of the streets or you don’t last in that realm. Slick and I battled over a prominently located electrical box near MOCA in 2011 and that is what inspired the look of the poster we made. Slick did a great job capturing the look of layers of posters and the printer Black Sunshine translated the image beautifully. Thanks for love, hate, and art Slick!
-Shepard

From Slick: This collaboration has been over 20 years in the making. To finally see this come full circle is just amazing. The image is inspired from the battle of the box that went on a few years back. This one electrical box in particular in Lil Tokyo. Big ups to Shepard, OBEY and OBEY Clothing for making this happen. Some may think the DISSOBEY collection was a diss on OBEY. I see it more as celebration of the essence of street art. Thank u Black Sunshine for the beautiful workmanship on this piece. Big ups to our soldiers “the DZT crew” on the streets keeping it 100………. See more from Slick here. 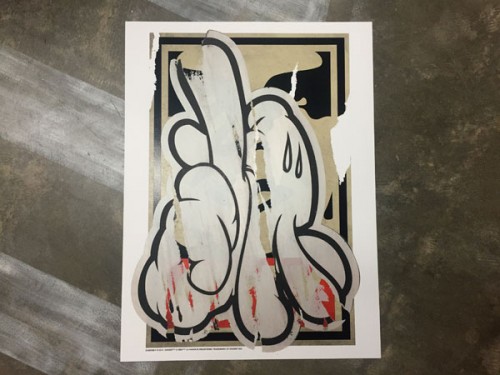 18 x 24 inch screen print on thick white paper. Signed by Shepard and Slick. Numbered edition of 187. $80. Limit is 1 per person/household only. Release Date: Friday, February 13th at a random time between 10am and 11am PST in PRINTS. 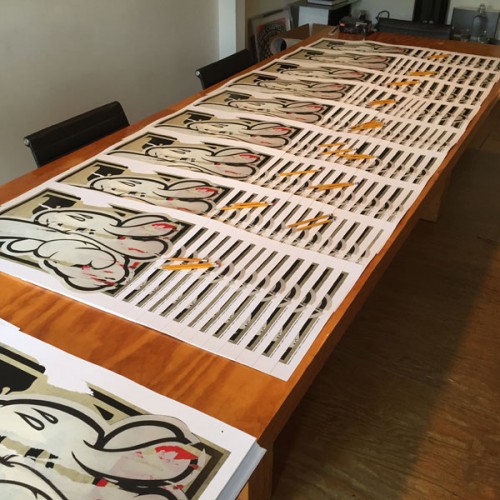 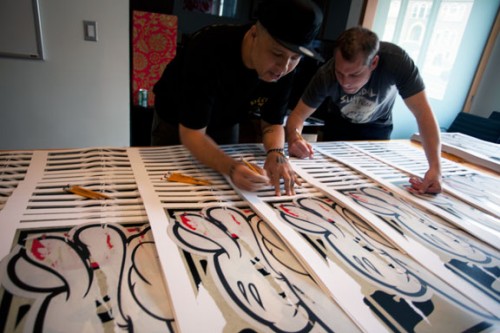 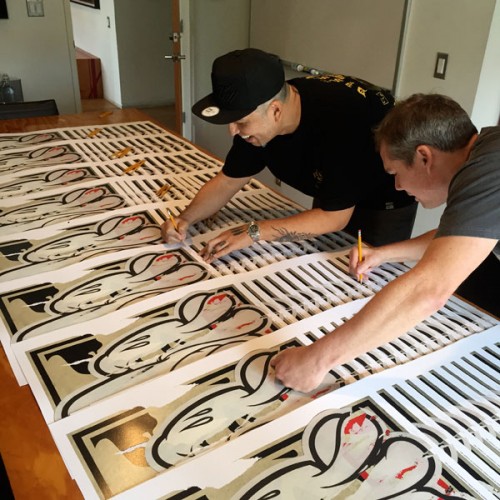 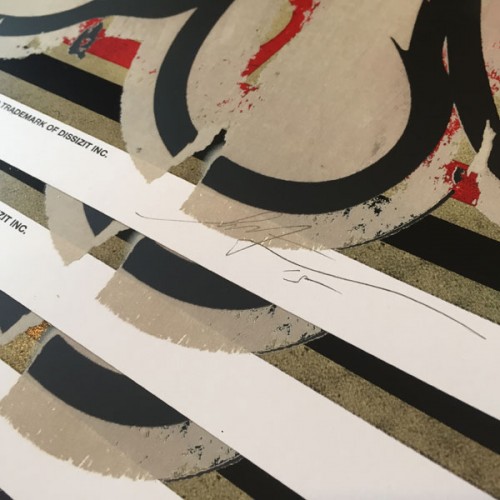 Inspiration for the print / the battle of the box: 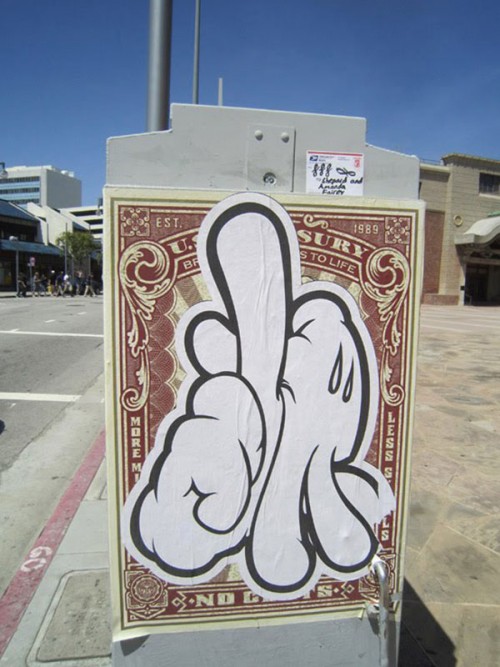 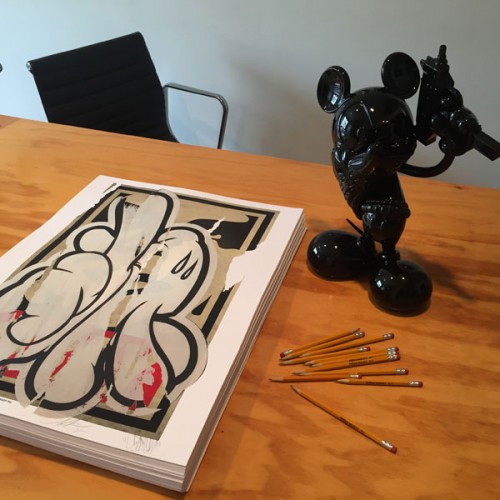 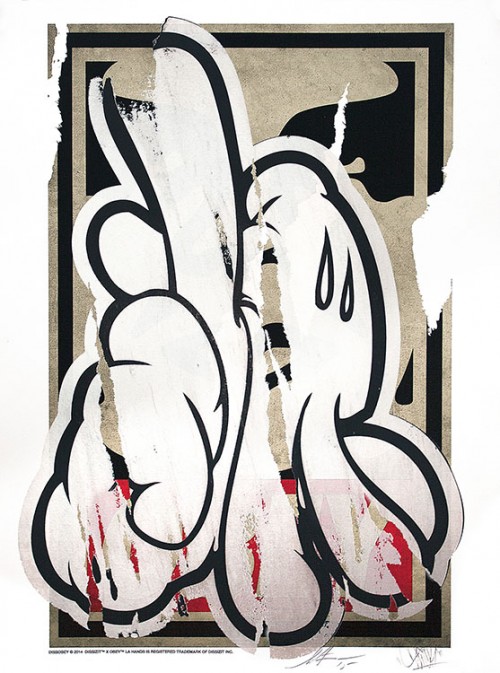