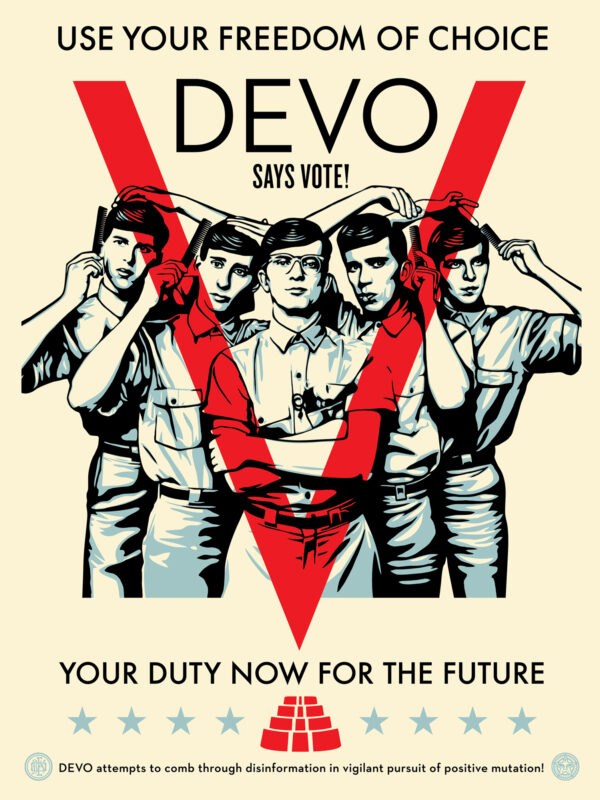 This “DEVO Vote!” print, based on a photo by Robert Matheu, is a call to action and a celebration of the brilliance of Devo’s music, visuals, and ideas. I knew nothing about Devo when I first heard “Whip It” in 1980 on the radio, but I loved the quirky and catchy style of the song. I called the radio station obsessively requesting the song until they finally told me, “that song isn’t in rotation anymore… stop bugging us!” Later I got into punk rock and Devo had a following with some people in that culture. I noticed that Devo was a lightning rod because they were one of the few punk/new wave bands that crossed over a little bit into the mainstream. When I started skateboarding, a parent who thought they were funny asked me, “you aren’t gonna start wearing a flower pot on your head like Devo, are you?” As I listened to more Devo and paid closer attention to their lyrics, I realized how brilliant and subversive their examinations of devolution and mindless conformity were when packaged in catchy new wave songs. The Devo albums, “Are We Not Men?”, “Freedom of Choice” and “New Traditionalists” are all amazing musically and lyrically. Devo also made really cool videos and graphic art. I now consider Devo to be one of the smartest and most fully realized art projects to infiltrate pop culture. The members of Devo also care about social and political engagement… you could say they are democracy DEVOtees, so proceeds from this print will benefit the Rise work to get out the student vote. The print is signed by Mark Mothersbaugh, Gerald Casale, Bob Mothersbaugh, and me.
-Shepard

DEVO Vote! 18 x 24 inches. Screen print on thick cream Speckletone paper. Based on photo by Robert Matheu. Signed by Shepard Fairey, Mark Mothersbaugh, Gerald Casale, and Bob Mothersbaugh. Numbered edition of 575. SOLD OUT. Proceeds go to Rise. Available on Tuesday, September 8th @ 10 AM PDT at https://store.obeygiant.com/collections/prints. Max order: 1 per customer/household. International customers are responsible for import fees due upon delivery.⁣ Orders may be delayed due to COVID19. ALL SALES FINAL.