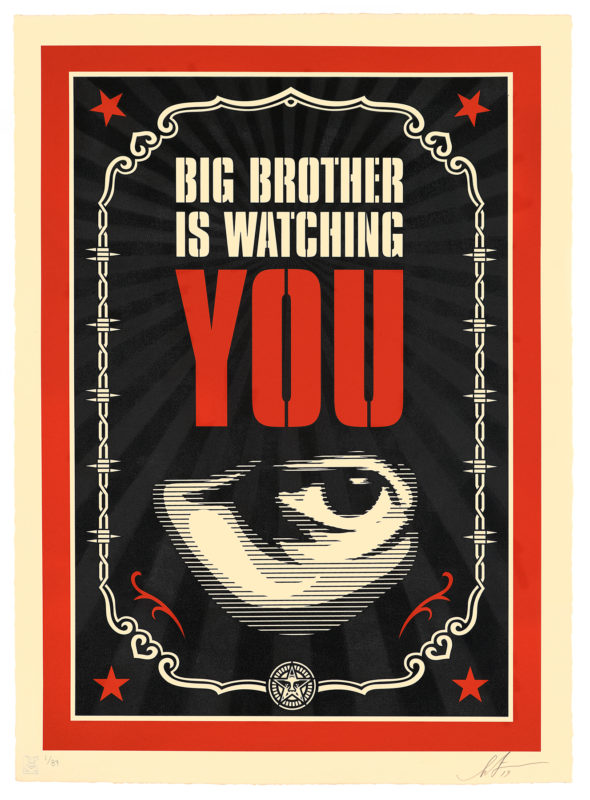 BIG BROTHER IS WATCHING YOU

Since 1998, references to “1984,” George Orwell’s cautionary tale about a totalitarian state, have appeared in Fairey’s work including several iterations of Big Brother. In 2008, Penguin Books (UK) approached Fairey to design the cover of Orwell’s classic books “Animal Farm” and “1984.” Fairey uses one of the most memorable phrases from the book, “Big Brother is Watching You,” combined with the image of a menacing eye, to remind us that the technology society has grown to depend on is being used to monitor, register and influence our activity. The artist’s use of Big Brother to urge citizens to question corporate and state surveillance, proved prescient as initiatives like the NSA surveillance programs made public by Edward Snowden, Cambridge Analytica’s use of Facebook to manipulate the 2016 election, or China’s pioneering a system of governing by surveillance, were revealed. From navigation, to gathering information and all forms of communication, digital devices have become integral to everyday activities for much of the world’s population. Technology provides the ultimate convenience while simultaneously registering our every move.

Fairey reminds us that technology makes us more susceptible to misinformation and manipulation. Raising the question, how do we take advantage of the conveniences afforded by digital technology without sacrificing our privacy and freedom? Orwell and Fairey share affinities as creators, their respective practices in literature and visual art are fueled by a desire to inspire the public to question the dominant narrative and challenge systemic forms of oppression and control. Inspired by the Spanish Civil War and the rise of the Third Reich, Orwell described his work as, “written directly or indirectly, against totalitarianism. “As a means to combat the governmental and corporate control of public space, Shepard Fairey was inspired to address abuse of authority on the street. Most importantly, both the author and the artist realized that to communicate effectively with the public, the creator must, “fuse political purpose and artistic purpose into one whole.” The impact of Orwell’s numerous essays and political pamphlets pale in comparison to his literary works. Likewise, Fairey’s impact as an artist would have been minuscule if he had followed the art world rules and made work that only a privileged few could relate to.

Big Brother Is Watching You. Serigraph on Coventry Rag, 100% Cotton Custom Archival Paper with hand-deckled edges. 30 x 41 inches. Signed by Shepard Fairey. Numbered edition of 89. Comes with a certificate of authenticity. SOLD OUT. A portion of proceeds will go to the ACLU. Available Tuesday, September 3rd @ 10 AM PDT at store.obeygiant.com/collections/prints. Max order: 1 per customer/household. *Orders are not guaranteed as demand is high and inventory is limited.* Multiple orders will be refunded. International customers are responsible for import fees due upon delivery.⁣ ALL SALES FINAL.⁠