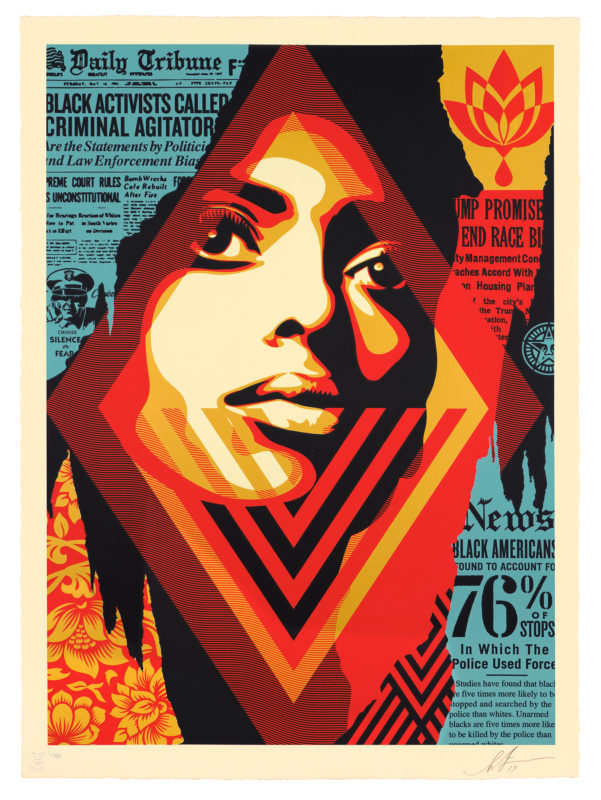 IMPORTANT ANNOUNCEMENT FROM THE OBEY GIANT STORE: “Facing the Giant: 3 Decades of Dissent” is officially launching with a series of 30 prints from the last 30 years of the OBEY GIANT art campaign by Shepard Fairey. The first print in the series is “Bias by Numbers” launching NEXT WEEK, May 21st! Due to high demand, we are hosting a lottery for a chance to secure your purchase for the “Bias by Numbers” print. In celebration of #FACINGTHEGIANT #OBEYGIANT30TH, 10 winners will receive an opportunity to purchase the print before it sells out. Submit your e-mail address through the link in bio to participate. You’ve got until Midnight, 12 AM @ Friday, May 17th to enter. Winners will be chosen at random and notified via email. Good luck!

For much of my career I only made 18 x 24-inch screen prints of my images, so for this series I have created 30 x 41-inch fine art prints on custom paper. This series will be the first time many of these images are available as nicer art pieces. It has been fun to revisit older images utilizing the broader palette of techniques I’ve developed over the years. To kick things off, I’ll be starting by releasing newer images and spanning back to some art that hasn’t been seen for a while.

I’ve touched upon the abuse of authority by police and racism with several images that I created over the years, but since this series of 30th-anniversary works is only 30 images, I chose “Bias by Numbers” as an important piece that features an intersection of those concerns.

“Bias by Numbers” addresses racial bias in policing, criminal justice, and media culture. Racial bias in policing and criminal justice has a long history, including stats like – black people being five times more likely to be stopped and searched than white people, and four times more likely to be subjected to unnecessary use of force, or four times more likely to be killed by the police when unarmed. The statistics revealing racial bias in prosecution and sentencing are compelling as well. Though recreational drug use is equally common in both predominantly black communities and predominantly white communities, convictions for drug possession are almost six times higher for blacks. Blacks frequently receive longer prison sentences than whites contributing to African Americans being incarcerated at more than five times the rate of whites.

Racial bias in police enforcement undermines public trust and presents a significant threat to the legitimacy of law enforcement in all communities. However, racial bias as a police issue may be intensified by other cultural factors which are both overt and insidious. Media characterizations of black protesters use words such as “agitators,” “lawless thugs,” “hoodlums” and many more, whereas descriptions of white protesters typically read as individuals “exercising free speech,” “expressing their convictions,” and “showing what democracy looks like.” I hope this art doesn’t just appeal visually but allows viewers to look at the layers of information and facts and think about how to make positive changes to patterns of injustice.

Bias by Numbers. Serigraph on 100% Cotton Custom Archival Paper with hand-deckled edges. 30 x 41 inches. Signed by Shepard Fairey. Numbered edition of 89. SOLD OUT. A portion of proceeds will be donated to Black Lives Matter. Available Tuesday, May 21st @ 10 AM PDT at store.obeygiant.com/collections/prints. Max order: 1 per customer/household. *Orders are not guaranteed as demand is high and inventory is limited.* Multiple orders will be refunded. International customers are responsible for import fees due upon delivery.⁣