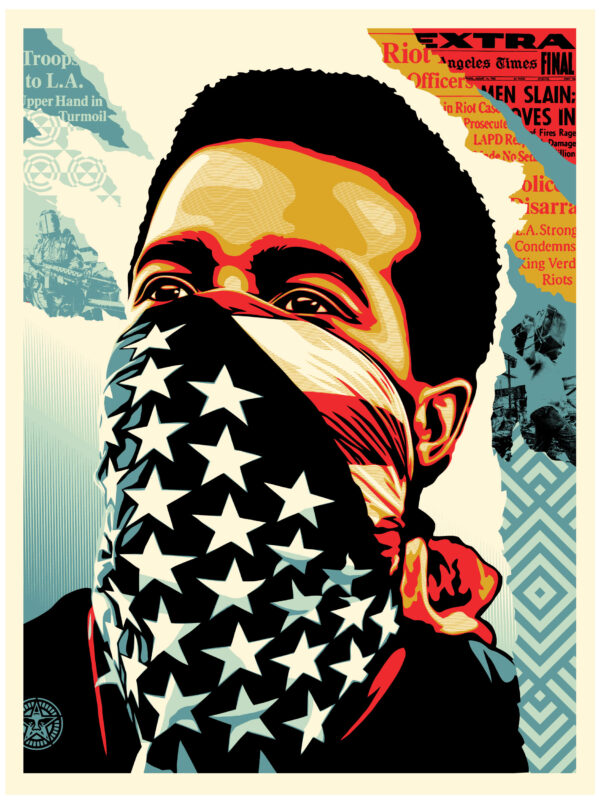 This “American Rage” print, based on a photo taken during the LA riots of spring 1992, is my second collaboration with photographer Ted Soqui. I was introduced to Ted’s work when I made an illustration based on one of his photos of an Occupy Wall Street protester. Ted has a long history of photographing activists and protests, which began in the aftermath of the “not guilty” verdicts on April 29, 1992, for the four officers who severely beat Rodney King. I remember at the time, 28 years ago, feeling enraged that such a blatant act of police brutality was going unpunished when it was clearly captured on video. It is heartbreaking to me how frequently similar acts of violence and abuse of power by law enforcement have gone unpunished, even when caught on camera. I don’t ever condone violence or looting, but I understand why LA erupted in riots and protests after the King verdict. When people feel that the American system has failed them over and over, things can reach a boiling point. The urge to protest injustice and the right to do so are legitimate. Looting is not legitimate. The LA riots were a tragic mixture. However, beware of those who try to conflate protest with “criminal agitation” or “inciting a riot.” When the system fails the people, it is nothing short of patriotic for the people to protest for a solution. Ted Soqui and I sign the “American Rage” print. A portion of proceeds will benefit WLCAC (Watts Labor Community Action Committee). Edition of 550. $70. -Shepard

The Watts Labor Community Action Committee (WLCAC)has been working with people in Watts to improve the quality of life since 1965. They hold the hands of people in need by providing a place to sleep, food to eat, and money to earn. Through the commitment of dedicated staff and volunteers, the WLCAC has helped more than 30,000 people in need over the last 45 years.

Flag Bandana and the L.A. Riots

In April 1992 I photographed week of rage. The Los Angeles Riots was the culmination of institutionalized police violence and a justice system that failed to represent minority and working class residents.

At the time I had been covering the shooting death of 15-year-old African-American girl Latasha Harlins by a Korean-born liquor store owner, and the beating of Rodney King by LAPD officers. Both of those events had been taped and were being constantly replayed in the media. I photographed several resulting protests against the police in South Central Los Angeles, most of them calling for the removal of then L.A. Police Chief Daryl Gates and all of them including chants of “FUCK THE POLICE” taken from song “Fuck Tha Police” by NWA.

On the afternoon of April 29, 1992, I was at the courthouse in Simi Valley awaiting the verdict of the four LAPD officers who beat King. The verdict dropped — not guilty, times four — and the city burned into the night. For three days and nights I roamed the streets of L.A. trying to cover the mayhem of a large-scale rebellion. I attempted to cover everything I could without getting attacked and robbed for my cameras; many of my colleagues were beaten and robbed for their gear. I photographed during the daytime and early evenings, and processed my images at home in a makeshift darkroom at night. Most of the camera stores and labs were closed burned or looted, and a dusk to dawn curfew had been imposed on the city.

Aug. 21, 2014: The flag bandana wearer was someone I found as a popular subject. Days before this demonstration in South Central Los Angeles., there had been a police shooting in Ferguson, Mo. That city was about to experience rebellion much like L.A. had 22 years earlier.

Many of the protests and demonstrations I now photograph are related to what was happening back in the early 1990s: police violence against young black men, lack of minority and working class representation in the criminal justice system, poverty and lock of quality education and jobs for the residents of South Central Los Angeles.

I was drawn to the striking visual of this young demonstrator speaking out against a rise in shootings of black men by LAPD officers and Los Angeles County Sheriff’s deputies. Often protests have an anonymous core of participants who wear bandanas not only to protect themselves from tear gas but also to make a visual statement. Movements around the world, from Chiapas to Hong Kong, have adopted mask-wearing for the same reasons. This particular mask was both a cover and a shield, and a direct reflection of the events I witnessed in 1992.
-Ted Soqui

American Rage. 18 x 24 inches. Screen print on Cream Speckle Tone paper. Original photo by Ted Soqui. Signed by Shepard Fairey and Ted Soqui. Numbered edition of 550. SOLD OUT. Proceeds go to Watts Labor Community Action Committee. Available on Thursday, April 30 @ 10am PDT at https://store.obeygiant.com/collections/prints. Max order: 1 per customer/household. *Orders are not guaranteed as demand is high and inventory is limited.* Multiple orders will be refunded. International customers are responsible for import fees due upon delivery.⁣ ALL SALES FINAL. Shipment of orders may be delayed due to COVID19.