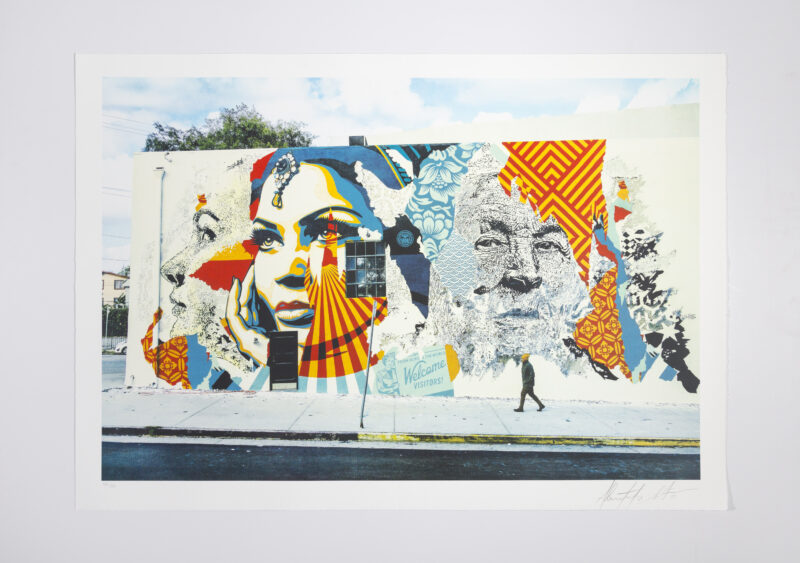 “American Dreamers” is a collaborative mural in Los Angeles that I worked on with Vhils in 2018. We created a lithograph print of this mural at Idem Studio – a historical, fine-art print shop in Paris, where they use a very special process to print their lithographs and have worked with masters like Matisse, Picasso, Miro, Dubuffet, Braque, Chagall, Giacometti, and Léger. You can learn more about their lithography below!

For those of you who missed out on release at Underdogs Gallery last month, here’s a second chance! I’ll be releasing a select number of these on my site: obeygiant.com on January 28th at 10 AM PDT. As always, thanks for the support!
-Shepard

Information about Idem Studio: Built in 1881 by printer Eugene Dufrenoy, the workshop located at 49 rue de Montparnasse was created to install Dufrenoy’s lithographic presses. Housing two floors on 15.000 square feet, the workshop begun with 19th century flat machines operated by belts driven by propeller shafts and a steam boiler that was used to provide energy for the machines.
The premises were later occupied by the Michard Printing Company, which specialized in creating special edition maps filled with vibrant colors. Finally, the workshop fell into the hands of Fernand Mourlot in 1976 and became a fine art print shop. The brother duo and craftsmen were part of the revival of lithography and began working closely with artists such as Pablo Picasso, Henri Matisse, Alberto Giacometti, Joan Miró, Marc Chagall and many other artists of the 20th century. Today the printshop is dedicated to contemporary artists such as Sophie Calle, JR, William Kentridge, David Lynch, Paul McCarthy or Raymond Pettibon.
By using flat stones or aluminum plates an image is drawn on the stone or transferred onto the plates that is then met with water and oil-based ink that is rolled across. The paper is placed and the matrix is ran through a press where the oil-based ink is transferred onto the paper creating the lithograph. The density of ink is very generous and gives an exceptional result.
The Mourlot company is now known by its current name, Idem, and stands as one of the oldest printing houses and one of the only that still uses the traditional techniques of lithography.

American Dreamers. Original photography by Jonathan Furlong. Seven color lithograph on paper. Printed on a Marinoni press at Idem Studio, Paris. 27.6 x 39.4 inches. Signed by Vhils and Shepard Fairey. Numbered edition of 450. SOLD OUT. Available on Tuesday, January 28th @ 10AM PDT at store.obeygiant.com/collections/prints. Max order: 1 per customer/household. *Orders are not guaranteed as demand is high and inventory is limited.* Multiple orders will be refunded. International customers are responsible for import fees due upon delivery.⁣ ALL SALES FINAL.